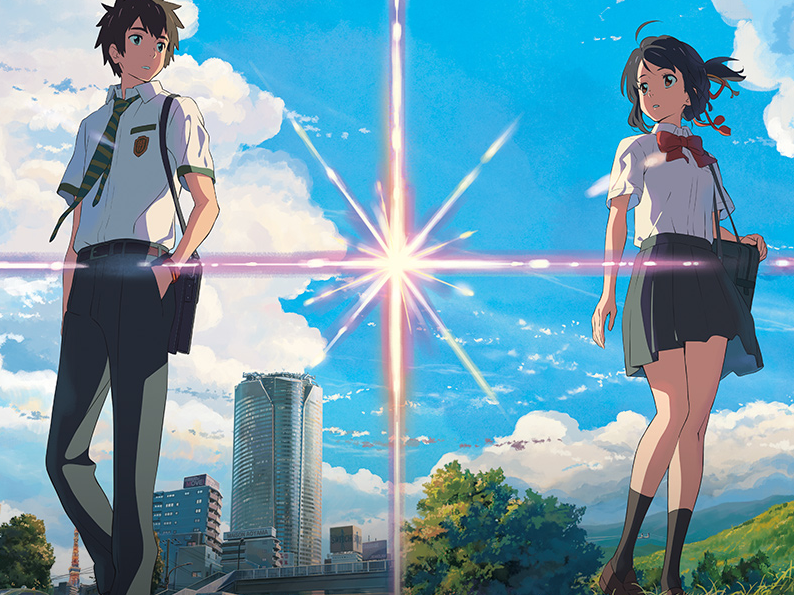 Taking the star-crossed lover theme to extraordinary new heights, Makoto Shinkai’s (Children Who Chase Lost Voices) latest animated feature film, Your Name, has not just dominated the Japanese box office – where it maintained the number one position for nine straight weeks -, but has also reinvigorated the global anime scene, delivering an original, beautifully conceived narrative that has deservedly flourished amid the recent torrent of brand recognition franchise flicks.

Stripping the film back to its most basic synopses, Your Name falls into three distinct categories: a quirky body swap rom-com, a poignant coming-of-age drama, and high concept science fiction think-piece. The beauty of the film, however, is its ability to blend all three into a coherent narrative populated with such endearing characters that every moment of the film’s 106 minutes run time is pure cinematic joy.

At the film’s core are Taki Tachibana and Mitsuha Miyamizu, two teens living very different lives. Taki is your typical Tokyo student, living with his father and working part time at a local Italian restaurant, while Mitsuha lives in a small rural town where her family are caretakers of the local village temple. Initially, the pair believe that the dreams that they are having of each other’s daily lives are simply that – weird dreams – until small clues lead to the realisation that they are actually inhabiting each other bodies. At first, the phenomenon leads to genuinely funny moments, as Mitsuha begins laying the groundwork for an unexpected romance with one of Taki’s co-workers, while Taki himself takes some questionable, if innocent liberties with his new found anatomy.

However, one of the side effects of the transference is that neither can remember the real identity of the other once they snap back to their own lives, hence the title of the film, Your Name. After a small number of frustrating attempts, the pair begin communicating through leaving diary updates on each other’s phones, eventually forming a bond that teeters on plutonic affection. But as the two decide to “connect” in the real world, a series of events culminate with the passing of a comet that heralds a cataclysm that shatters both Taki and Mitsuha’s understanding of their shared world.

Shinkai has proven with his past films that he understands how to tackle complex narratives by underwriting a film’s more fantastical elements with grounded characters. It’s a skill that has often drawn comparisons to Studio Ghibli’s godfather of anime, Hayao Miyazaki. But Your Name, emboldened by its a gloriously rendered animation, enchanting stylistic visuals, and thoughtful contemplation may be the film that stops the comparisons in their tracks, and finally offers the filmmaker recognition not as the new Miyazaki, but simply as THE Makoto Shinkai, acclaimed writer, director, and animator.