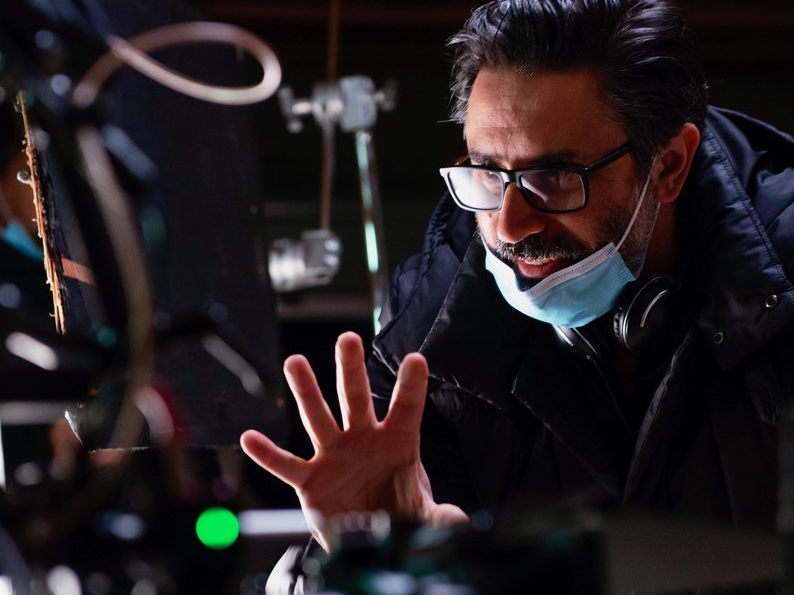 It’s been a tough pandemic for Frank Lotito, professionally speaking. Having watched his criminally underrated coming-of-age seventies-set comedy Growing Up Smith relegated to a nondespript on-demand fate after generating real hype on the festival circuit, the writer/ director also saw a number of projects and momentum – including a meeting with Warner execs – fall away as the pandemic wreaked havoc on smaller and independent productions globally.

However, 2022 look to reset Lotito’s directorial ambitions with the release Wog Boys Forever, the latest chapter in the popular Nick Giannopoulos headlined franchise. But while Wog Boys Forever closes off the unofficial Wog Bog trilogy (preceded by 2000’s Wog Boy and 2010’s The Kings of Mykonos), it certainly hasn’t been an easy road to the cinema, especially with the production taking place under the hinderance of pandemic lockdowns, and a media spotlight falling on leading co-stars and frequent Giannopoulos collaborator Vince Colosimo embroiled in some very public legal troubles due to some very personal issues surrounding his mental health.

Yet, Lotito’s effective ability of tapping the series Aus-centric nostalgia, having spent several years as an honorary Wog Boy himself (appearing in various stage production of the Wog-verse), brings a fresh but familiar adventure starring the film’s slacker protagonists Steve Karamitsis (Giannopoulos) and Frank (Colosimo).

As Wog Boys Forever makes its cinematic debut, we sat down with Frank Lotito to chat about the brave new post-pandemic world, reconnecting with his inner wog, and if woke Australia is once again ready to Wog-up.

You’ve been vocal about the disappointment you felt with the way Growing Up Smith was handled and distributed after its initially success at Film Festivals. Did the experience dilute your ambitions as a filmmaker?

“We opened the Montreal World Film Festival with Growing Up Smith. We did eight screenings simultaneously and had like two and a half thousand people watching the film at the same time. It was just such a huge buzz, and so when the distributor came onboard – it was a fairly new distributor – but we felt like it was a good match. Unfortunately, they shelved the film for a year. So yeah, things didn’t quite gel.

“But Nick Giannopoulos saw Growing Up Smith and really loved it. And gave me the job to direct Wog Boys Forever based off the screening he saw.

You’ve worked with both Nick Gianopoulos and the Wog Boy franchise before, but as a stage actor? Was it strange to step behind the camera to direct, as opposed to interacting one-on-one with these characters?

“Yeah, I mean I started my career in this industry is an actor. Specifically, as a comic stage actor. I don’t like to use the word ‘wog’ comedy, I never really did ‘that’. But you know, my comedy was based on my upbringing as an Italian Australian, so it became tagged as ‘wog comedy’ or ‘ethnic comedy’. But really it was just me telling stories.

“So, I had become good friends with Vince Colosimo and in 2014, I was in the US producing another film. I got a call from Nick Giannopoulos offering me a job on the The Wog Boy stage show back in 2015 because he had seen some of my work online. I had a four-month break, and so I went over and did the stage show with the guys, with Vince, Nick and Alex Dimitriades.

“To be honest, I had kind of steered away from that stuff at the time. I just felt like it wasn’t challenging for me anymore. And I really wanted to move into film and television.

“But the whole time we were rehearsing, I thought, “Is this stuff funny, are people actually going to come and watch this stuff?”. But we opened the show, and it was a huge hit.”

“It was a huge hit. We played to sold out shows. We did the Majesty’s Theatre and sold out every night and we did shows at the Enmore Theatre in Sydney, which was a 2000-seater, and sold out every night. Then at the end of the tour we were like, ‘We should keep on going?’ We could have kept on going for the whole year, but I had to go back to the States and do another film, so we couldn’t.

“But when Nick saw Growing Up Smith, he saw what I really wanted to direct features and kept me at the back of his mind. And true to his word, he offered me the gig. It was my first gig since the pandemic started?

The Pandemic was a true agent of chaos, not just for the film industry, but across the political and social spectrum of well. With previous editions of the Wog Boy films having touched on grass roots antics of real Australians, does this latest chapter tap into the pandemic’s effects?

“We shot during lockdown number four, so it was a bit of a challenge, but we got through it. We got the film done, and It’s what audiences will kind of come to expect of The Wog Boy movies, but no, it doesn’t touch on the pandemic. We don’t go anywhere near it, no.

“It’s interesting, it’s more in line with the first Wog Boy, so all the old characters come back and Nick’s character, Steve Karamitsis, is at the centre of it all. It’s 20 years later and I don’t know if you remember in the first movie – Hinch kind of made him [Nick] famous. He was the wog boy who was on the dole and all that sort of stuff. And in this one, Steve is a down and out kind of guy; he’s a taxi driver, lives in a garage… He’s kind of alone.  He doesn’t have girlfriend or a wife or a family and without giving away too much, he reconnects with his old mate Frank, played by Vince Colosimo, and they kind of get that Wog Boy spark back again.

“There is a bit of a political subplot where it’s the ‘Wog Boy against The System’. And of course, he saves the day at the end, but t’s a lot of fun getting there. There’s some big characters and some new characters that come on board. Audiences are really going to lap it up.

You mentioned Derryn Hinch making his famous cameo in the first Wog Boy film. With the franchise having become such a cult-icon and having such longevity in Aussie comedy culture, did you manage any notable cameos for this latest chapter?

“Yeah, Hinch is back. He does a new cameo. Then we have Seb Costello from A Current Affair playing a journalist as himself. And there’s a very popular group at the moment called the Sooshi Mango made up of three guys, and they’re in this movie, and it’s kind of weird. What’s funny is I was sitting with the editor and one of the guys, he plays a woman in it – I don’t know if you know them but they do many different characters – so they’re not playing themselves.

“One of them plays an Italian mother and when the editor started putting the film together, he’s like, “It’s really good that you’re being inclusive in this film”, because he thought the guy was transgender or whatever and I said, “No, no he’s just playing a character”. So, it was quite funny that, “being inclusive”.

Speaking of which, it’s been twelve years since The Kings of Mykonos, the Wog Boy sequel was released. A lot has changed since then, especially with cancel culture and rise of Twitter trolls and accountable wokism having a real-world effect on the entertainment industry. Was there any consideration, or did you feel the need to be actively aware of how you approached certain topics, or themes in Wog Boys Forever?

“Yeah, look it was a tough one. Obviously with cancel culture and this woke generation, it’s there, in the back of your mind. As you know I did stand up for a little while. I did a show a couple of years ago, a one-off stand-up show. I hadn’t been on stage for about six years prior to that and things had changed, and even then, I was kind of worried. ‘Should I say this? Should I say that? Is that going to really rub people up the wrong way?’ And so, you’re constantly in the back of your mind questioning whether this is kosher, is this is the right kind of way to do it, or say it? So yeah sure, to answer your question: Yeah.

“But just like back then, I think what Nick does best, is he knows his audience. He knows that a particular thing is going to get a laugh or this scenario, they’re going to get a kick out of. He’s not too worried about what the other people are going to say or whether he’s going to get cancelled. Just as long as he is giving his audience what they want. So, I guess in retrospect there are things in there, in the film that I feel l might rub people up the wrong way, but I also feel like the audiences are going to get a real kick out of it.

And should audiences keep their eyes open for a Frank Litito cameo in Wog Boys Forever?

“No, no I’m not in the film at all. I was very close to doing a cameo. We shot during a period where not only was the pandemic on, but there was also a lot of productions reopening at the time. The Americans were doing shows, the Australians were doing shows and so crews were very hard to come by. I mean, we really struggled to find enough crew.

“So, we called a few favours from friends of ours, a couple of who happen to be actors. And we thought, why don’t we just get these guys in the film as well? They can do a day here and a day there and do some of these smaller characters. They work so hard – some of these guys have never done unit work before. This was just something that they really wanted to help out with and get involved in.

“So that one cameo that I was going to do, I actually gave it to one of the unit guys that came in and he did a fantastic job. I thought it was really nice to kind of give back a little.”

It’s been a long take between gigs for director PARK Dae-min, with his last action...