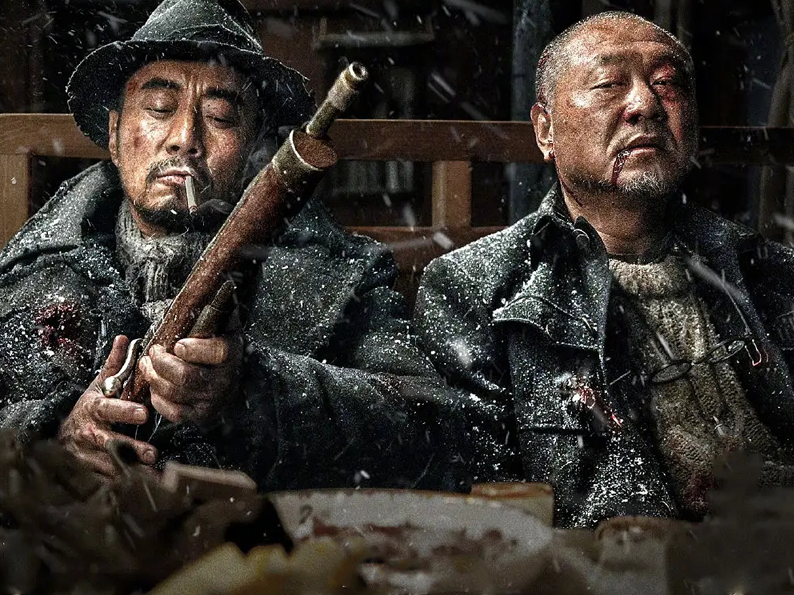 The fabled story of the Lunan Railway Brigade, officially known as the 115th Division of the Eight Route Army, might not be familiar to many western audiences, but the small band of railway workers, situated in cold wastes of China’s Shandong Provence, have found themselves memorialized in popular Chinese culture with their exploits in waging a war of Resistance against the occupying Japanese forces during the second Sino-Japanese War on par with such legendary exploits as those recalled in The Great Escape, Lawrence of Arabia and Australia’s own ingenious withdrawal from the cliffs of Gallipoli .

With a number of books and serials having been written about the Lunan Railway Brigades legacy, a new feature film from writer / director Yang Feng brings a cinematic resonance the harsh brutality faced by the workers, not just from the cruelty of the Japanese aggressors, but the frozen wastelands of Shandong itself. As a beautifully realized war drama, Railway Heroes manages to merge dynamic action sequences into a taught spy thriller, humanised with the personal stories of the ordinary men, and women fighting against unfathomable odds.

With Railway Heroes about to make its Australian premiere, day and date with its Chinese release, we spoke with the film’s director Yang Feng, whose adaption of the legendary 115th Division is set to mark the director as a force to watch.

By chance, during 2016 I happen to look up the historical written records about the “Jinpu Railway Line.” Explains Feng when questioned about his familiarity with the Lunan Railway Brigade. “I was immediately attracted by the history of China’s earliest railway line which dates back to 1904.  My research eventually took me to 1937, the year in which the Second World War broke out and when Japan invaded China.

“The Japanese army occupied this main transportation line that ran through China’s north and south. On the “Jinpu Line” in the Zaozhuang section of Lincheng, Shandong, the legend of the 115th Division of the Eighth Route Army and the Lunan “Railway Brigade” fighting the invaders attracted me.”

With a commitment to honouring the legendary unit with the respect an authenticity demanded by those who fought during the conflict, Feng acknowledges that his adaption of their story became a formable task in separating fact from fiction. Choosing to pen the script, and assemble the narrative threads himself, he undertook his own personal journey into the lives, and legacies of those who were no longer able to speak for themselves.

“In order to verify this history, I visited more than a dozen descendants of the “Railway Brigade”. I also went to the Local History Museum and the Locomotive Museum to conduct research visits. Based on the large number of oral narrations of characters and the support of historical documents, I wrote the first draft of the script of “Heroes of the Railway” three years later.”

With the film taking place during a particularly harsh winter in 1939, Railway Heroes is a elegantly framed film, with a deliberate harsh aesthetic designed to effectively act as a metaphor for the cruelty of the Japanese army. However, while it adds a cinematic sentiment that almost romanticises the film historical setting, it quickly becomes apparent during our conversation that Feng’s quest for authenticity pushed not only himself, but his cast and crew into a very dramatic shoot.

“I was also the director of photography for the film.” Explains Feng. “The establishment of the film’s style and tonality was actually formed at the writing stage of the script.”

“In order to increase the sense of coldness and the harsh killing style in the film, we chose to set up scenes in the wild without providing any heating equipment for those shoots. The low temperature shooting environment quickly affected the performance of the actors, but this is exactly what we needed.”

Set to dominate the Chinese box-office, still recovering from the pandemic that had forced cinemas to shutter their foyers across the country, Railway Heroes features a strong ensemble cast, each of whom seem to carry a reverence for the real-life hero they portray, delivering solid performance across the board. Helmed by industry heavy weight Zhang Hanyu (Assembly) and popular character actor Fan Wei (My People, My Homeland), with a support cast including former popstars turned actors Yu Hao Ming (The Eight Hundred) and Vision Wei (Midnight Dinner), and notable co-stars Zhouy Ye (Better Days), Shang Tie Long (The Grandmaster) and Japan’s Morisaki Hiroyuki (Ganbare! Team NACS), Railway Heroes producer Yang Lei joins the conversation to offer a little insight into how the cast was pulled together.

“We first found Teacher Zhang Hanyu.” Explains Lei using the respectful honorific of Teacher in reverence to his veteran actors. “Who is a tough guy. For so many years, he has portrayed countless popular hero images on the screen.

“Then I found Fan Wei. Fan Wei’s screen image is flexible, and his popularity is also very high. Knowing that Zhang Hanyu had joined us, Fan Wei was also very happy to join.

“Being able to work with so many professional actors at the one time is a rare and unforgettable precious experience.”

However, Lei’s praise for his cast and director turns slightly introspective as the subject of shooting under the threat of COVID-19 inevitably surfaces, revealing that the film, for all its sprawling action and large set design, complete with numerous extras, went into production with strict safety protocols in place.

“The epidemic had a certain impact on filming, but the impact was not particularly large. Everything was under safety protection, and the shooting wasn’t particularly effected.

“Last year, the film industry was shut down for about six months.” Continues the producer “And then it began to recover. Since then, the release of “The Eight Hundred” has become the world’s No.1 in terms of box office last year.”

And while Lei’s retrospective musings of the films production are largely painted in positivity, director Feng’s own experience helming the blockbuster-in-waiting is derived from a more cautious contemplation as he looks back over the ambitious shoot.

“In retrospect, the process of shooting this movie was extremely difficult.” He concludes. “The crew of nearly 1,000 people spanned more than 3,000 kilometres across four cities in this cold winter to work. The extreme cold and the degree of control of foreign personnel in different regions during the epidemic made us exhausted. If I were going to do this again, I’d try to avoid the transition of a large-scale team and focus on single site in which to shoot, hopefully saving both time and costs.