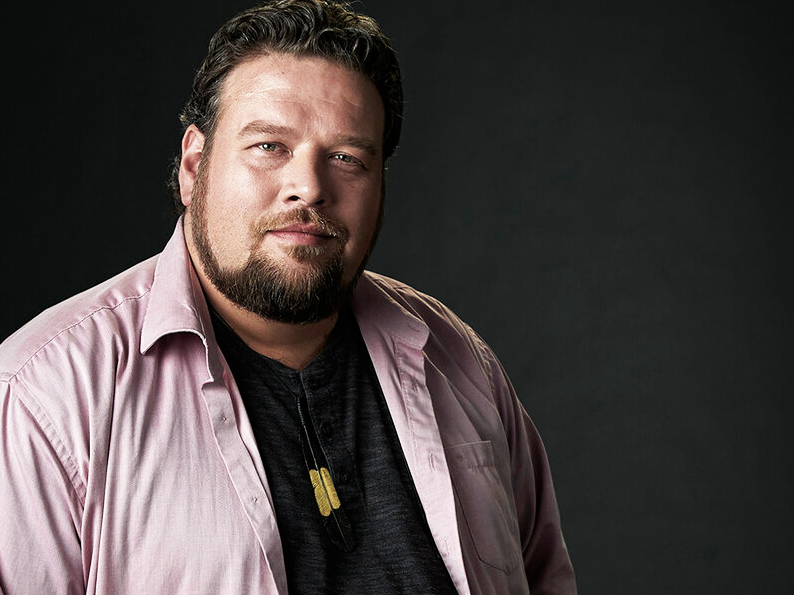 WARNING: Aboriginal and Torres Strait Islander readers are warned that this content may contain references, images and voices of deceased persons.

Tiriki Onus isn’t a name traditionally associated with the filmmaking community, with the indigenous creative having previously craved a significant reputation for himself within Australian Opera. However, upon discovering some forgotten mementos of his grandfather, civil rights activist and proud Yorta Yorta man Bill Onus, Tiriki found himself on a personal journey that would eventuate with the remarkable, and timely documentary feature Ablaze.

A chronicle of the Onus legacy, Ablaze is a poignant expose on the struggles faced by Ingenious Australians to not only claim their civil rights, but to be allowed the simple privilege of preserving their culture, which was either being crudely appropriated by the entertainment industry during the 1940s and 50s, or purposefully quashed by government policy. The legacy of Bill Onus, already established as a figurehead of civil activism and social change, is further elevated through Ablaze, infusing the icon with inflection, motivation and personal connection as Tiriki embraces his own pride as a Yorta Yorta man whose creative spirit as a storyteller, performer and advocate harkens back through his bloodline. And while Ablaze marks the baritone’s debut as a talented filmmaker, it also mints Tiriki, like Bill before him, as an unexpectant First Nations filmmaker.

With a special screening of Ablaze happening on March 5th as part of the Australian International Documentary Conference (AIDC), Tiriki Onus will also be moderating one of the AIDC’s more compelling sessions, Collaborating Vs Consultation: Moving Towards Better Practice In First Nations Storytelling. A discussion designed to open and explore inclusivity with First Nations filmmakers, reaching beyond the traditional consultation roles to becoming active participants in producing indigenous stories for the screen. At the same time guiding non-Indigenous collaborators on the correct handling of Indigenous content and how to ensure cultural legitimacy and safety.

“I think like many of these conversations, it’s an evolving one.” Elaborates Onus “Where, once upon a time we were probably happy to be consulted, and there was certainly a drive to be consulted. Even to just have a conversation first. But now, when it comes to working across cultures, and working very much in this occupied space, if you will, I think that most indigenous film subjects tend to have to deal with, it in some way, shape or form that continual question of, “How can we do better? What more is needed?”

“Where, as I often ask myself in life in general, where is the authority enforced in this conversation? Who’s holding it? I think that is really starting to drive these conversations more and more. Whilst we have had fantastic guidelines in the past about how to consult on indigenous film from AIATSIS (Australian Institute of Aboriginal & Torres Strait Islander Studies), and from Screen Australia and the like, we haven’t continued, necessarily, to publicly grow that conversation.

“Oftentimes it seems like the conversation is always a little bit behind where our current understanding, where our current conversations in a broader society are. As a First Nation person working in film, I know from personal experience that, oftentimes there is a discomfort with which one sits where you’re trying to define what your role and responsibility is. Certainly what your role, and responsibility to other first peoples who are part of that project is as well.

“Because you end up carrying not just your own narratives and your responsibility in this space, you’ve got a job to advocate and support everyone involved in the making of this film, and indeed the legacy that’s going to be left, that you’re going to have to navigate and carry. Certainly that seems to come home for me, again and again, whenever I have these conversations.”

Joining Tiriki on the AIDC stage to discuss the complex themes inherent of such a broad topic are several engaged professionals from Australia’s entertainment sector, including Angela Bates, Head of the First Nations Department Screen Australia, Producer Mitchell Stanley from No Coincidence Media, Gillian Moody, a Wodi Wodi woman and producer at Kalori Productions and First nations descendant of the Butchella and Jagera people and CEO of Ramu Productions Jodie Bell. A select group which Tiriki acknowledges should bring a lively, insightful and comprehensive dialogue to the session.

“I haven’t actually met any of them before.” Muses Onus “I’m familiar with their work, but our first opportunity to meet was digitally, a couple of weeks ago where we got to discuss some of the trials and tribulations of working in this shared space.

“I think we can have a much more involved and sophisticated conversation about what allyship looks like. About what it means for us to be able to, not just make space, but to empower other people’s voices within a space. Not to speak for them, but to do that work. I think there is a tremendous opportunity in this country for us all, black, white, brindle, wherever we come from, to be able to celebrate the strength, the history, and the stories of the country that we stand on.

“I hope, that in having these conversations into the future, we’re able to identify more, and more, ways for us to be able to contribute in that space. I don’t think we necessarily have to be afraid of things like appropriation if we are creating meaningful, and tangible ways to celebrate stories, and histories, together. If we’re able to give the credit and the voice, to those stories. To see ourselves as being agents of change, if you will, or vehicles in the telling.

“That’s certainly something I hope we can start to get to, and it’s something I hope we can touch on when we come to the panel. I think there’s a great contribution that can be made to Aboriginal and Torres Strait Islander communities, and to the broader fabric of this continent by amplifying, and highlighting, the stories of First People. It’s only going to come through meaningful allyship, collaboration, and shared vision. It will probably require us to make a bit of a change, to perhaps flip the paradigm in which we’ve traditionally engaged, on its head a little bit.

“I don’t think it’s a question of saying, “Well this is indigenous subject matter. Only indigenous people should tell that story.” I think it’s actually about saying, “There are indigenous stories, so how do we celebrate them? And who has that final say, and responsibility?” That’s very, very different. I also think a very productive and rewarding space to me, if we can move beyond our very binary right or wrong system of the past. To instead talk meaningfully about the stories. Not just the stories that we want to tell, the stories that we need to hear.

As the legitimacy of First Nations films begins to take hold around the globe, thanks in large part to dedicated programmes featured in such respected festivals as Sundance, Berlinale, Sydney Film Festival and the Melbourne International Film Festival – which hosted the world premiere of Tiriki’s debutant effort, Ablaze – the conversation turns toward the threat of the movement becoming gentrified as a mere ‘brand’ as the labels ‘Indigenous’ or ‘First Nations Filmmaker’ threaten to isolate those working in the space from the wider filmmaking community. However, as audience begin to gravitate toward new content that is both enlightening as well as inclusive, Onus remains optimistic that the creative industries have, and will continue to embrace more inclusive practices, and face down the discomfort of those who came before them.

“I think it can be a flawed issue.” Elaborates Tiriki with a considered pause. “I think there’s a desire for active participation, but at the same time there is potentially a great deal of fear. A great deal of fear about doing the wrong thing. About getting things wrong.

“Sometimes labels can seem perhaps a little superficial. It can almost seem tokenistic. I certainly know, from working on my own film, Ablaze and having to convince some people that, no, in fact I was co-directing this film with Alec Morgan. I wasn’t there in a tokenistic fashion, rather we were making this film together. Collectively the both of us.

“It was a little bit difficult, and challenging, for people at times. I think that sometimes there’s a weight of low expectations, that Aboriginal, and other First World people have to fight our way through. There are low expectations for our abilities, and sometimes for the stories. On the other end of the spectrum, once we are in there, once we’re doing the work, there are terribly, terribly high demands and expectations placed on an Aboriginal connected to a project, whether they be directing it, whether they be writing it, producing or working as a consultant, or in any other capacity, to somehow get it right.

“That process doesn’t always start at the logical point. It’s not always from the very beginning of something. Quite often it’s much, much later down the line that someone has to come in and try to make good on something that has already started and got well underway.”

With Ablaze now working its way through the festival circuit, Tiriki has once again found himself an unintentional champion of Australia’s indigenous creative community, drawing acclaim and applause for a beautifully intimate portrait of his grandfather Bill, whose own personal history is inexorably fused with our nation’s social evolution, and film culture. However, while viewers will definitely profit from the films compelling narrative, it’s difficult to comprehend the impact the films journey has had on Tiriki himself, who under the shadow of his grandfather’s legacy, has, and continues to firmly cement his mark on Australia’s entertainment landscape.

“Bill and I are separated by some 12 years, from when he died and I was born. There was always this presence of Bill in my life. A lot of the story I was aware of. But what I think I was really surprised by was the size and the scope. Unpacking all of that world around Bill, and around what he was working for, and against. The tremendous duress under which he was producing work is quite extraordinary. That was certainly surprising to me.

“It’s been an emotional rollercoaster.” He continues with a warm sincerity “However it has reaffirmed a lot of the things that I believe about the world, and about Bill and the legacy that he has left for me, that I now enjoy. And you’re quite right; I have, to some extent grown up in the shadow of Bill, and it’s not a bad place to be. I quite enjoy the shade.

“It has been a very, very long journey, and I think for a lot of my life I’ve wondered to myself, “Well, what would Bill think about this? What would Bill do? Am I carrying that legacy of both my father, and my grandfather?” I have changed, but that change has mostly been embodied in a greater certainty. A greater sense of strength of self and direction, which continues to inform what I do now, moving forward.”