Sun Zengtian: The Mages of Suzhou 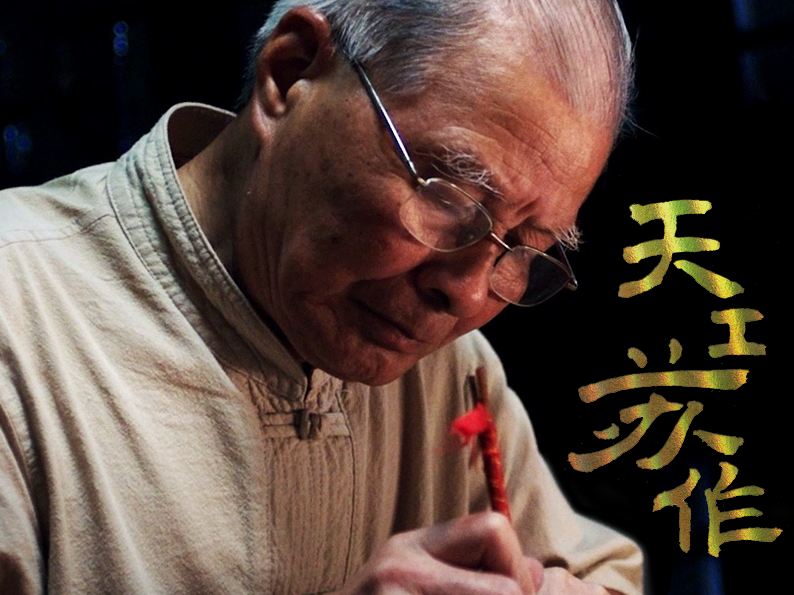 There are certain historical perceptions that colour our notion of traditional Asian arts, and while each region has their own unique attributes, the deep history of Chinese traditional arts and crafts often evokes a near mythical exploration of folklore, militia and exuberance. Themes interpreted and given form by artisans forged of legacy and shaped by weathered hands, knotted by repetition and dedication, not just to the craft, but to each artistic endeavor in and of itself. And while these aspirational perceptions hold some fundamental truth, they often overshadow the heartbreak, struggle, and seemingly hostile relationship the artisans face with encroaching technology, fueled by China’s volatile fetish for modernization.

In the Jiangsu Provence of East China lays the city of Suzhou, a famed town where Dynasties long past and contemporary collectors alike, have sought the finest crafts, from rich wooden furniture to mesmerizing fabric lanterns, to delicate confectionaries, subtle seed carvings, complex embroideries, and the finest woven fabrics. Suzhou has held a place of pride in China’s artistic heritage reaching back nearly two thousand years, nurturing a recurrent culture of master and apprentice, where trade secrets infuse the DNA of its artisans and its modest, shabby warehouse lined alleys contradict the luxury artifacts created within.

Yet, for all its charm and reverence Suzhou has been thrust into the modern world. Glass and concrete high-rises laude over the quaint alleys, while neon lights wash out the opulent silk lanterns that once adorned the city’s many wooden structures. It’s an inevitable incursion of China’s economic might, one that has forced an evolutionary shift in the country’s cultural identity. And with this current generation of old masters beginning to retire, the interest in apprenticeships has begins to wane. And those younger enthusiasts who do take up the trade are coercing the older generation with new ideas, methods, and aesthetics, often at odds with lives spent dedicated to mastering a single artform.

It’s this existential threat, juxtaposed beside an exhilarating new creative cultural awakening that inhabits the heart of filmmaker Sun Zengtian latest documentary feature The Magical Craftsmanship of Suzhou, as he seeks to not just chronicle a fading generation of renowned artisans, but to celebrate their influence as he explores the evolution of various arts, the artists themselves and those securing the future through its past.

“The key message I want to convey is about tradition and innovation through the exploration of handicrafts.” Explains Sun Zengtian, a part-time professor at Beijing Broadcast Institute. “Our life cannot be separated from culture influences. Tradition meets modernity and innovation is evolved from inheritance, only then can we create a better life, and beautiful handicrafts, as well as build a beautiful city. This is what we need to consider during urbanization and improvement of life standards in the process of China’s modernization.

“The inspiration for this documentary comes from a great love for Suzhou – Suzhou is an ancient city in China with a history of more than 2,000 years. The city site has hardly been changed, so it has a long history and cultural heritage. Meanwhile, Suzhou is a modernized city, especially after the rapid development of Chinese economic reform and opening up. The integration of ancient culture and modernity in addition to the reivers-and-lakes based environment makes Suzhou very charming. I went to Suzhou many times, and have lots of friends there, as well as close collaboration with Suzhou film and TV industry. I gradually realised that the handicraft of Suzhou can best reflect this blend of tradition and modernity. This is where the inspiration comes from.”

But while The Magical Craftsmanship of Suzhou could easily have relied on the beauty and elegance of its impressive arts, the film manages to take its audience deeper into the life of the artisans, often showcasing the frustrations they face, not just with the world modernising around them, but from the very real tribulations of experiencing their bodies age, while their motivation holds strong. One example of which touches on the debilitating shakes experienced by a celebrated boat snack chef, while a Song brocade artisan struggles with her failing eyesight.

It’s an attribute that grounds the narrative in real human emotion, effectively striping away the romantic notions behind the exquisite art, and offering a far deeper appreciation of the work, and scarifies made by real people to achieve such a quality of work.

“It took me a long time to do fieldwork in Suzhou, and I become a very good friend with these craft masters and artists.” Sun elaborates, touching on his relationship with the artisans profiled in his film. “Those inheritors of crafts have been deeply nourished by traditional cultures, they tend to be very gentle and cultivated so their relationship with other people is never a problem. They took the initiative to cooperate with the shooting.

“The development of society as a whole, and especially in a late-developing country like China, where every city is eagerly catching up and every field is urgently being renovated. This has created a great contradiction and conflict between tradition and modernity. In this respect, Suzhou is one of the best cities in China to deal with this issue.

“The heart’ of Suzhou is not tightly bound by handicrafts and craftsmen. The main body of Suzhou is modern city, and the mainstream of Suzhou is modern life. It has preserved its ancient areas, which is a relatively intact space for traditional culture. At the same time, it has created a new science and technology park to carry out this technological innovation. A new industrial park has been built to develop the manufacturing industry. In this way, a tripartite is formed which makes city full of tradition and innovative vitality.

“Compared to some other cities in China, most of them are in conflict between maintaining tradition and innovative development, with development suppressing or even destroying traditional culture. So, Suzhou is a city that is particularly worthy of learning from. Filming handicrafts subject was actually based on my understanding of the city and my recognition of its development. It was a way to express the culture of the city and its inclusiveness by using the subject of craftsmanship. It also expresses a broader meaning, that the direction of a city, or even a country, should be to maintain its fine cultural traditions while at the same time innovating and developing.”

In fact, with nearly a hundred credits to his name across film and television productions, innovation and development are two aspects of Sun’s filmmaking process that have infused his latest work with an amicable dichotomy, allowing him to indulge theatrical aesthetics while maintaining a viable cinéma vérité quality. A duality which the director acknowledges serves as a metaphorical parallel to his own professional aspirations.

“The documentary shows the current society. Our current era is developing with each passing day, and both tradition and modernity are constantly changing.” He muses. “Our film industry and this craftsmanship are actually very similar. We are also constantly taking up the task of expressing a new life with new tools.

“When I was studying film, I used film to make films, and later it became digital film. The fact that we are making a film about Suzhou’s crafts is particularly a reflection of my belief that all traditions can be passed on is actually the result of innovation. That is to say that traditions that survive are innovative at the time and then become the traditions of tomorrow.

“Film is the same, that’s why I’m very keen to embrace the new technologies in film, the changes in equipment, the changes in creative techniques, all of which offer a wider scope for creativity, more methods, more convenience. For example, in the past, if you wanted to shoot aerial photography, you had to mobilize a big plane and apply for airspace. Now drones can fly whenever they want. And there’s even more benefits in post-production. So, I’ve always got this enthusiasm for new technology, and then studied and researched, especially when I was teaching students and PhD students, we were always researching new issues, new processes, new production, new creative features.”

The Magical Craftsmanship of Suzhou is an affecting film. It’s at once a showcase of beautifully realised art works, a moving profile of dedicated, funny and generous artists; a philosophical conversation on community and a celebration of culture. But ultimately, Sun has delivered a documentary that years from now will feel more relevant and necessary than ever. And while it remains at heart a seminal Chinese narrative, there are lessons and insights to be gleamed from anyone with a creative heart and a nostalgic outlook for the past.

“This documentary begins to screen overseas at just the right time. The pandemic is almost over, but international relations have become particularly complex.” Concludes Sun, touching on his motivation and hopes for the films international release. “As a film about traditional Chinese culture, the screening abroad will help people to understand more about Chinese culture.

“The whole world is indeed divided between the East and the West. Although it is globalization now and understand each other more and more, East and West after all two different sources of civilization. That’s why we need to understand and embrace each other more. Culture has no borders, the more diverse it is, the better it is. The more diverse, the better. Let us all share a world where different beauties and cultures can be appreciated.

“Since I studied painting as a teenager, I have been drawn to handicrafts and creative folklore. The production process of this documentary is a process of awareness. I originally thought that craftspeople and craftsmanship represented more of the past era and skills of the past. But through this film, I feel that they are actually condensed traditional Chinese cultures. After getting to know these craftsmen in depth, I saw that everything that reaches a certain level needs to be supported and sustained with culture. These master craftsmen not only have an extraordinary imagination, but also a profound mind. They have even entered a philosophical dimension. Craftsmanship is not simply a matter of making something by hand, it is also a cultural and even a spiritual level that makes it possible to create exceptional craftsmanship.