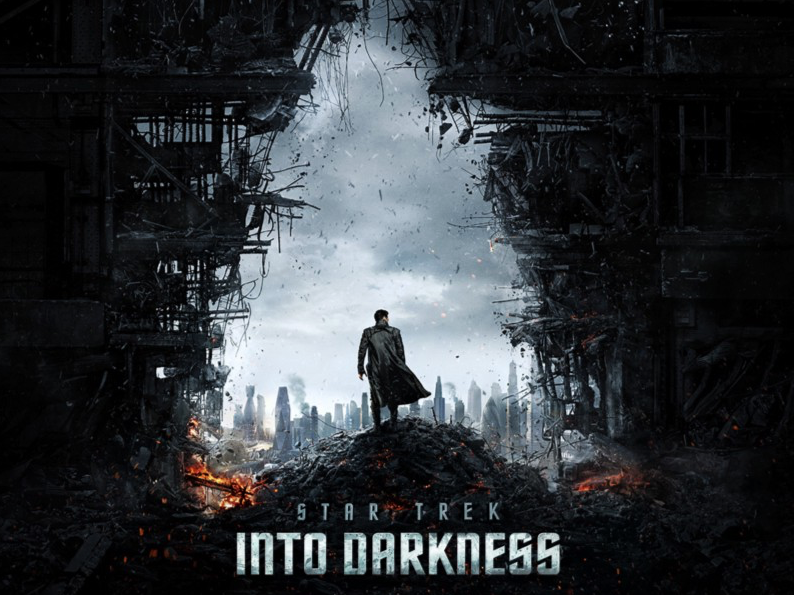 When you look over the cinematic excursions of J.J. Abrams, the 46-year-old producer, writer and director presents an intriguing conundrum with each film in his repertoire, delivering contradictory fusions of strikingly original, yet instantly familiar storytelling. From his unique take on the found-footage monster-meets-city genre of Cloverfield to his suburban sci-fi homage ‘Super 8’ which affectingly harnessed the magic of Spielberg at his prime. Abrams’ strange repetition even managed to breath cinematic life back into the flailing Mission Impossible franchise by reigniting the nostalgic sparks that made the original 1960’s series so iconic.

Which brings us to his latest block buster, sci-fi extravaganza, Star Trek Into Darkness, a timely follow up to his mega successful 2009 reboot of the original 1979 film franchise. Reuniting his original cast, lead by Chris Pine as James T. Kirk, Zachary Quinto as Spock and New Zealand’s Karl Urban as Doctor Leonard McCoy, Abrams has spent the past 12 months effectively navigating internet trolls and the Trek fandom to ensure details of the film’s various twists and turns, including the identity of his main antagonist, are kept from the public record. In fact, in Abrams’ quest for secrecy the director even convinced the Studio to construct huge walls around his exterior shooting locations to keep out prying eyes, and lens.

Further exploiting a spoiler hungry media, Abram’s team have been drawing inspiration from their avant-garde online marketing campaign that helped see Cloverfield reach unapparelled hype, with Star Trek Into Darkness embracing an effective, if misleading series of advertising and trailers specifically designed to manipulate audience perceptions, until that is, they find themselves seated in front of the big screen.

And so, after instilling and unprecedented hype for a Trek property, the secrecy, Machiavellian manipulations and wild speculations, the final question remains; is the film any good? Thankfully the answer, for the most part, is a resounding yes.

Through no fault of its own, Into Darkness serves two audiences, the legions of Trekkies spawned from the various TV incarnations, and a wave of Abrams fans who flock beneath the Bad Robot banner, a mantle that encompasses cult show such as Fringe, Lost and Person of Interest. And while Abrams delivers an exciting, action infused visual playground with his Trek sequel, it’s the script penned by long time cohorts Robert Orci and Alex Kurtzman that drives the film’s more exhilarating revelations, and which likely have some fans lamenting the films jump-the-shark ambitions.

It should be noted that while I’ll attempt to avoid any major spoilers in the following review, if your knowledge of trek universe isn’t exactly up to scratch, you should read on at your own peril.

Although the timing may have been a little unfortunate with the Boston marathon bombings, Into Darkness is at its core a man-hunt procedural, with Kirk hell-bent on capturing a bomber who decimates Starfleet’s London Archives, single handedly wiping out a good portion of Starfleet’s high command, including Kirk’s mentor and friend Admiral Pike (Bruce Greenwood).

Sanctioned by Admiral Marcus, played by the brilliantly malicious Peter Weller, Kirk is sent after the fugitive John Harrison, (Benedict Cumberbatch in an inspired piece of casting), who has fled to an abandoned city on the xenophobic Klingon homeworld of Qo’noS, with orders to essentially nuke the site from orbit.

Realising his anger could be the catalyst that starts a war with the Klingons, Kirk instead apprehends Harrison with the intent of having him stand trial for his crimes. A decision that unleashes a tidal wave of conspiracy, betrayal and death… without giving too much away.

Visually, Star Trek Into Darkness is stunning, from its superbly choregraphed space battles to the sweeping futuristic cityscapes of London and San Francisco, and the fully realised technical design and world-building of the Star Trek universe.  And yes, J.J.’s trademark lens flare runs rampant once again, which occasionally plays havoc with the films otherwise impressive 3D transfer.

As for the cast, the ensemble seems to have found an effective ease and comfort within their roles, infusing Into Darkness with a smoother flow and more grounded, casual interactions that allows Star Treks more nostalgic qualities to shine through. One concern, which has continued to plague the Trek franchise from its original 1960s incarnation, is the effective sidelining of the second tier characters, namely Sulu (John Cho), Chekov (Anton Yelchin), Scotty (Simon Pegg), and in this case Bones (Karl Urban), are relegated to the background, as the story pulls focus on Kirk, Spock and surprisingly Uhura (Zoe Saldana) as the story plays out. Further adding to this conundrum is Abrams adding to the cast, with Alice Eve joining the bridge crew as Carol Marcus, whose presence should raise a few eyebrows for those familiar with Trek lore.

Star Trek Into Darkness is an ambitious film, building on the foundations of its predecessor and holding true to the nature of the franchise. Combining humour, action and drama, Abrams once again delivers us an original experience that tweaks nostalgic without any hint of being neither stagnant nor stale. There is an argument to be made that the film overreaches, with a number of stumbles, but regardless it’s an impressive feat, and one worth catching on the big screen.