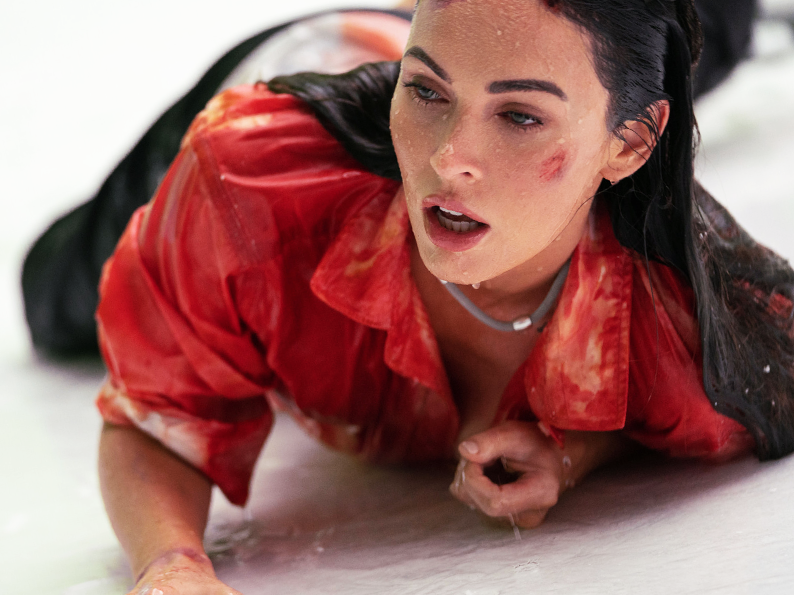 Having honed his genre chops directing the acclaimed short films Tommy (2020) and The Coatmaker (2018), Australian filmmaker Scott Dale, who now operates under the pseudonym S.K. Dale, delivers his debut feature film, Till Death. Landing somewhere between a darkly comedic survival thriller and psychological horror, the film stars Megan Fox – in a welcome return to the genre – as Emma, a disillusioned trophy wife whose indiscretions eventually leave her trapped in a remote lake house during the dead of winter, handcuffed to her dead sociopathic husband while a deranged killer seeks revenge against the femme fatal.

And while it sounds like there a lot going on, Dale’s deft handling of the narrative – along with some inspired casting which includes Eoin Macken (Nightflyers, Resident Evil: The Final Chapter), Aml Ameen (I May Destroy You) and Australia’s own Callan Mulvey (High Ground, Shadow in the Cloud) – manages to deliver a tight, cohesive and tense cat-and-mouse actioner that essentially allows Fox to carry the film from it unnerving opening scene to a gratifyingly bloody climax.

“When I came on board as the director, we spent a few months developing the script,” Explains S.K. Dale from his hometown of Melbourne. “Then we decided to start casting for our main protagonist. It was actually Jeffrey Greenstein, our producer from Millennium Films who put Megan Fox’s name out there. And, I have to admit, I was a little bit taken aback.

“I figured we were just going to have to wait a month, and then hear a firm ‘no’ from her people. I honestly didn’t understand why we were even going for her, for someone that big. But, about a week later I got a call saying that she’d said yes and that she wanted to talk.”

While Fox’s name managed to add some star power to Till Death’s modest beginnings, the actor’s recent controversies surrounding verbal feuds with former directors, and her outspoken advocacy and activism within the Me Too movement, which included sharing her own experiences as a young woman in film, has drawn no small amount of self-loathing trolls to actively target her projects of choice, a situation Dale reveals he was aware of, but chose to ignore, instead listening to his inner fanboy and betting on the probable benefits outweighing any negative stigma.

“Yeah, it wasn’t that it wasn’t particularly taken into account.” He elaborates when the subject arises. “But I’m such a big fan of Jennifer’s Body. And so, I was excited to see her come back into this particular genre film. I just knew people would be ready to see her take on a role like this, and in a genre like this.

“And you know, obviously Jennifer’s Body didn’t get a whole lot of love when it first came out, but over the years it’s kind of built up this large cult following. So it was really exciting to me, this idea of Megan re-entering this genre and her trying different characters; someone that’s a little bit more grown-up and mature, but still being able to play in this ballpark.”

A ballpark which S.K. himself has firmly embraced with his chosen brand of storytelling. Having garnered acclaim with his 2018 short film The Coatmaker, a masterful four-minute supernatural horror, which the Australian born director also wrote and produced under his Scott Dale moniker, and which S.K. decisively credits as laying the foundations for his feature length début.

“I did a short film called The Coatmaker, which was a little horror-jump-scare type of short. And that pretty much got me a bit of attention. And, along with my manager, it got me into a few meetings, and that led me to the script for Till Death.

“But yeah, I definitely love playing in his genre. Hopefully I can expand into other genres and create different characters and all that. But I definitely found it suitable, as a first-time director, to come into this genre.

“I believe that the horror genre is one of the only genres left where you can still be original. You don’t have to have something based on IP, and you can try something a bit different or unique.”

Having originally been penned by producer-screenwriter Jason Carvey, whose previous efforts include in the VHS Massacre films, Till Death had spent time on Hollywood’s aptly named ‘Blood List, a kind of short-list for the best un-produced screenplays in the Horror sector, before eventually landing on Dale’s desk where it underwent a number revisions and rewrites to help infuse the violent thriller with the Melbourne born directors own unique creative attributes, including his panache for darkly ironic humour.

“I mean, for me, especially first time I read it, it felt like it was about this woman who was stuck in a lifeless marriage. And now she’s stuck, literally to a lifeless husband, and that was really compelling.

“And so we developed the script in a way to take the audience down memory lane, whether it’s the wedding dress, those photos in the dark room, the wedding song, all those elements were designed to give you a little taste of her past. She obviously had a lot of trauma that she’s gone through, and that’s slowly coming back to haunt her.”

As a horror tale, Till Death hits all the marks that a bloody thriller should, from the visceral carnage to the Final Girl tropes, its genre through and through. But where the film effectively acends its pedigree, is via the wonderfully droll cynicism it affords to the failed marriage narrative that lays at the heart of the films plot. Fox brings a genuine sense of exasperation to her role as Emma, a trophy wife whose boredom with the vanity of her marriage sees her play out with an extra martial affair, while Eoin Macken brings a sinister, Machiavellian charm to the role of Mark, whose final act of cruelty toward his wife is to have her fight for her life while handcuffed to his own corpse. A visual metaphor of the pairs relationship which Dale jokingly admits had to be executed for the camera a little differently than what he had planned.

“We did build a dummy, and we did use it. I think we used it for two shots.” He explains as the subject of Megan Fox literally dragging a body with her throughout the majority of the film inevitably comes up. ‘But besides that, we actually had a stunt man, Boyan Anev (Black Widow), have to play the dead man the whole time. Because the problem was, with Megan pulling and tugging and twisting the body we needed the limbs to act realistic every time, and we just couldn’t get that realism from the dummy.

“In retrospect, I think we needed to have something a lot more technical in terms of its bone structure and muscles and all that for it to work like we want it to. So the only way it was going to look realistic on film was to have a real person attached to Megan Fox for the entire shoot.”

Another unexpected hurdle that the production was forced to navigate was the COVID pandemic, which had not just shut down a number a studio productions, including film and television, but which had decimated the cinema industry, with multiplex and independents effectively corralled into shuttering their doors, forcing numerous productions into the less than ideal streaming arena.

“It was a huge challenge” Recollects Dale on the effects the pandemic wrought on the production “We were actually gearing up in March of 2020, it was actually the day of my birthday, when the studio got locked down. I’d brought in a cake, and they were like, ‘Sorry, you’re going to have to go home’. So even though we were about a week away from shooting at that point, everyone just flew back home with no idea what was going on.

“Then about two or three months later we were called back in, and it was just a different world. There were security points everywhere you went. Your whole crew was essentially divided into three groups. You had group A, group B, group C. It was set up that way to separate the crew as much as possible, and make sure the virus didn’t spread. But we definitely didn’t have as many crew on set as we would have liked. And obviously, we’ve all got masks and we’re having to socially distance and everything like that. So it just slowed things down a lot.

“But it also allowed us to have 10 hour working days with a running lunch, which the crews really loved. They really embraced that, the idea that if we can work hard now, we’ll get home a little bit earlier and see our families. But yeah, thankfully we got through the whole shoot without a single case of Covid.”

However, Dale does acknowledge that while the cast and crew navigated their way through the Covid protocols to complete the film, the sad reality is that Till Death remains locked in a certain limbo as communities and industry struggle with their reopening, unsure when and if audiences will return to the comfort of movie theatres in the wake of two years’ worth of social-distancing conditioning.

“We’ve had a small theatrical release in the US” Dale elaborates “But internationally the film hasn’t fully opened in a lot of countries yet. They’re just kind of building up to welcoming back an audience. So we’re waiting to see, but I do hope it happens, because honestly, everything we did in terms of the grade, the sound design, all of that, it was all focused for the optimal theatrical experience.

“Ultimately, Till Death is one of those films that is absolute roller coaster of a ride, an action-packed kind of thriller. So, I hope people really get to experience the movie like we want them to, instead of just on a laptop.”