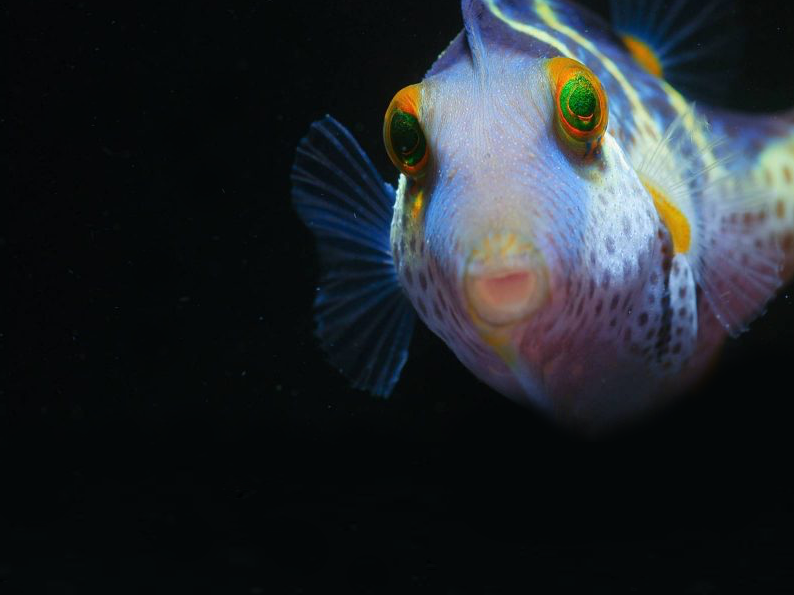 As Netflix continues to submerse itself in the Australian entertainment landscape, the streamer has just dropped its first locally produced feature documentary with Puff: Wonders of the Reef, a surprising and enthralling natural history documentary that takes its audience deep into the microcosm of Australia’s Great Barrier Reef.

Featuring narration from the versatile Rose Byrne (Physical) and directed by acclaimed filmmaker Nick Robinson (Australia’s Ocean Odyssey), Puff takes the enchanting approach of leading viewers through the coral corridors of our oceans with its own adorable (but surprisingly toxic) tour guide, an adolescent pufferfish, aptly dubbed Puff.

As we get to watch Puff navigate his often-deadly sanctuary, populated with coral cities, diverse communities of many-hued monstrosities and reality-bending botanicals, all shot against and ever-shifting landscapes of the ocean floor and its atmosphere of currents, the unique perspective of our little puffer fish guide opens up a new world of discovery and survival.

But it’s a perspective unlike any seen before, thanks in large to cinematographer and co-producer Pete West, whose production team was tasked with creating a range of new technologies able to zoom and capture a constantly shifting, actively organic, underwater microverse.

“I think that it all came down to micro-motion control. The ability to control large cameras in very small spaces.” Explains West as he contemplates the challenges that drove the innovation in technology required to shoot Wonders of the Reef “Quite obviously a lot of the animals that we worked with in Puff were of a macro to micro size. That means that in order to move a camera in a cinematically fluid way, you have to have absolute precision control.

“As it happened, this was something that we’d actually been working on for around five or six years relating to some of our other scientific endeavors. And so we were able to take a lot of the knowledge and technology that was developed for those purposes and use them within the context of this film.”

And while a great deal of the visual spectacle on screen is reminiscent of a James Cameron or Neil Blomkamp showreel, West insists that the incredible attention to detail is derived from his physical equipment, with any computer program innovation purely assisting his camera rigs.

“No, it’s very much the hardware.” He explains when the question of CGI enhancements is raised “Of course there’s always the software side of things when it comes to the programming of some of the moves, because the hardware just doesn’t exist at that level.

“But it was a matter of taking a look at what was available as far as microscopes around the world and the ability to manipulate microscopic images. And then adapting it with what was commercially available to us. And fortunately we had the support of a number of different companies who took an interest in what we were doing and we were able to come up with what we needed.”

But with the technology effectively inviting an entirely new perspective on the coral environments of The Great Barrier Reef, West admits that the film, for all its natural grandeur and compelling aesthetics, wouldn’t have landed as it had without their tiny protagonist Puff. And while the little fish was seemingly tailormade for stardom with his large eyes, striking colours and inquisitive personality, West jokingly admits that the casting choice was narrowed down from a literal menagerie of perspective stars, thanks to a very particular character trait.

The short answer to that?” Says West “Is because he cooperated.

“The thing is that when it was suggested that we would look at having a fish as our principal character, something that we could follow through the story, we set out to have a look at what characters could do that. And, I think we had half a dozen different fish at one time which we collected, and started to observe over a period of time.

“Normally it takes weeks for animals to settle in and start to act in a natural sort of way because you’ve upset them by moving them and so on. But the difference with Puff was that the same afternoon we brought him back and placed him into one of the tanks, I just stood there in front of it, and it just sat in front of me and stared at me exactly as you see it in the poster of the trailer for instance. It just simply stared straight at you.

“And then as you’d move it would look at you for instance. And every other fish that we brought back was darting around the tank and hiding behind things and up and down, but not the puffer, the puffer was inquisitive. And we soon realized that it’s because they feel like they do have superpowers, be the fact that they are a toxic fish for instance, other fish avoid them. And so, they seem to just move around relatively carefree.”

Puff: Wonders of the Reef plays as a remarkably family friendly journey of underwater adventure for the most part, but it’s an unfortunate attribute of our time that any documentary about our natural wonders will inevitably have something of a trigger warning for the environmental destruction wrought by the worsening climate crisis. And while West acknowledges his film does touch on that clear and present threat, it’s a presented as a mere domestic occurrence as opposed to a blatant work of finger-pointing activism.

“If it does shine a spotlight on the effects of climate change on the reef, that is a good thing. I think that what I personally believe is that what Puff is going to show an audience is the new reality.

“This is the reality as it has been for a while, and it’s only now that we get to produce films like Puff where you can see this and you can see the effects on the biodiversity, that it is absolutely diminished in these areas. If not wiped out totally.

“But I think each and every person is going to take something different away from this film.

“I think that we are still educating people, about what is it that we are losing out there. There are still so many people that don’t understand that coral is an animal. There’s so many people around the world who still think it’s some form of strange plant, so if we can just educate some of people through entertainment, then it’s a success.”

“But is it going to change people’s opinions, I really don’t know to be quite honest. I think that it’s entirely possible.

“One thing with the film that is we didn’t set out to make it a film that would push that too hard. We wanted people to realize that the effects, these are man-made effects on the environment and potentially that we could do something about it. But more importantly it was about people forming some sort of attachment with the animals, like Puff for instance and realizing that these are the animals you’re losing.”

Perhaps one of the films biggest environmental benefits will come from the reach offered by Netflix and its global audience, as Puff not only swims into Australian homes, but across international screens to educate and enchant. But while finding itself streaming globally is a feat in and of itself, West has nothing but praise for the entertainment giant as a production partner, especially with much of the documentary having taken place during the pandemic.

“They were absolutely incredible.’ West elaborates without any hesitation “We worked with them very closely and they provided the feedback that was necessary on almost a daily basis.

“And because we operate as a very small team here in Port Douglas, obviously we’re in far North Queensland, we were totally isolated.

“But the fact that we are able to undertake this throughout COVID was an extraordinary occurrence. It was something that we had long discussions with Netflix over, whether we could do it safely and guarantee the result. It wasn’t possible for us to fly in crew, or even unfortunately our director Nick Robinson, he was in Sydney for the majority of the shoot he was only able to come up here over a couple of weeks.

“But we were able to, fortunately through the beauty of the internet, convey the daily results and communicate with them in such a way that we were able to complete the film on time on budget. And I think the results speak for themselves.”