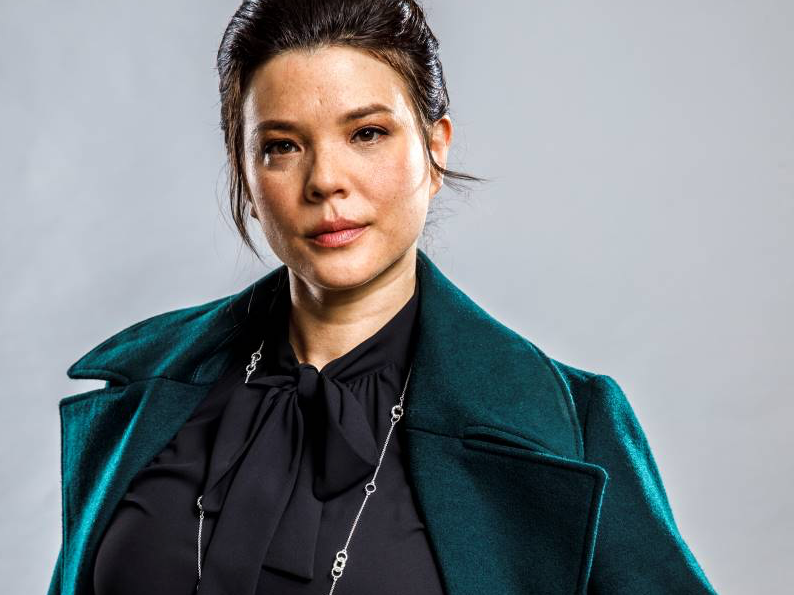 As the resurgence of the anthology series continues to rise in popularity, one of the more visceral and unapologetic incantations would be the aptly titled SLASHER, a bloody celebration of the late-night gore-fest that lurked behind Hollywood’s golden facade of 1970’s and 80’s consumerism cinema. For every Goonies, you had a Ghouls, and for every Steven Spielberg you had a John Carpenter exposing the bloodstains tainting the inside of those white picket fences.

Now, with SLASHER having slipped the constraints of its previous studio, and porting over to its new home on Shudder, the mutated incest baby of the streaming world where all manner of macabre and bloody entertainment goes to play, the series fourth incarnation, aptly titled Flesh & Blood has finally hit the airwaves. And while the new series delivers its expected menagerie of creative kills, torture and enough blood and gore to put a hillbilly abattoir to shame, this season promises a darker psychology thanks to a lethal injection of Machiavellian drama centred around its protagonist family, the narcissistic Galloways, who find themselves pitted against each other in a series of cruel and often deadly challenges to determine the final benefactor of the patriarchs inheritance.

While SLASHER fans will recognise a few familiar faces from past editions, including Christopher Jacot (Hellraiser: Hellworld) and the always indelible Paula Brancati (Degrassi: The Next Generation), Flesh & Blood has tapped some new and impressive talent for its Shudder début, the most notable being horror maestro David Cronenberg (The Fly, Star Trek: Discovery) who continues his recent slate of acting gigs. Delivering an ominous and calculated presence as the families ailing patriarch, Spencer Galloway, Cronenberg effectively sets the tone for the season, opening the door for the shows main protagonist, his mysterious proxy Dr. Persephone Trinn whom he tasks with not only assisting with his pending suicide, but to oversee the violent games forced upon his living heirs.

Taking on the challenging role of Dr. Trinn is the versatile and talented Jeananne Goossen, a Canadian character actor whose impressive body of work includes such critically acclaimed series as Nashville, The Handmaids Tale andThe Walking Dead. An accomplished writer and director in her own right, we managed to secure a little face time with the affable and charming Jeananne to discuss her foray into the SLASHER franchise, her take on horror in general and working alongside iconic filmmaker David Cronenberg.

Fletcher: Even though you spent a season working on AMC’s The Walking Dead, but I believe SLASHER: Flesh & Blood marks your first time in a dedicated horror franchise? Were you an actual fan of the horror genre before joining the project?

Jeananne Goossen: It’s my first time really working in the genre. I’m squeamish when I watch things, so I was really excited to get in, and because I also write and direct, I was excited just to see how it’s done. Like to actually see it done with no CGI, but where you really have artists doing their thing.

What’s exciting about this production, and what Adam McDonald, our director, guaranteed me – and he was so right – is that it’s one of the best sets I would ever work on.

Everyone is just a wonderful human being. Not only that, but everyone is completely dedicated to their craft, which isn’t always the case, especially not on really big budget productions. So when you have something that’s a bit lower budget, that is a work of passion for everyone, it’s just a ball of fun.

Seeing how beautiful horror can be when crafted by hand – they’re like art pieces. The prosthetics on the show was just unbelievable to look at in person. Like I said, I don’t watch horror, but I’m so excited to watch this show because I love the cast and I love the artisans and the artisanship of the entire thing.

F: So how was it that you came to be cast in the series? Did the producers approach you, or was there a casting process for the new series?

JG: Adam McDonald, who is the director of this season, and of some previous seasons, is an old friend of mine. We worked together as actors on this Canadian series (Wild Roses, 2009) and we just had a blast.  So when the role came around and I heard that Adam was working on it, I thought that would be fun to work with him again.

So we talked about it and, you know, they were very hush hush about the details of the character. I just had a slender understanding, just very little to work with, but I was guaranteed that it would be fun. I’m so glad I said yes because it really was one of the most fun parts I’ve ever played.

F: So with Adam knowing you as a friend and professionally, was the role of Dr. Trinn then tailored to you specifically?

JG: I’m not sure of the origins exactly, and I don’t know that it was specifically written for me, but I know that I was in mind when they came around with it.

But, you know Adam’s a sweet talker. He told me that there was no one else he could imagine playing it. Of course, I’m an actor, so I love hearing that.

I will just say, I love playing someone that’s already written as a full human being, someone multilayered, somebody who has the capacity to be many different things at many times – which is all of us in real life.

But of course, in television it has to be convenient, and so much of the time you end up with some two-dimensional thing on paper that you then have to fill up as an actor to make a whole person. I just had a lot of fun filling in a few blanks as there was already so much on the paper for me to be excited about.”

F: There’s been a good deal of hype surrounding David Cronenberg’s involvement in this new series. Did you or any of the other cast members get swept up in the hype as well?

JG: I’m sure there was, especially for all of us who are directors or aspiring directors, to have someone there with such a wealth of knowledge and experience.

But, he [Cronenberg] is an extremely humble, kind, family-orientated human being, which is exciting because you get to have the experience of watching his films which are so visceral and so relatable in a way that maybe you don’t want to be relating to, right? But then, to then have that inner understanding of someone’s mind or how they express themselves, and to meet this actual person who is just this kind, lovely human being who is a great conversationalist?!

Also, my character and his character have a special relationship which I enjoyed very much. And to get that kind of intimacy with someone – I feel like I know him in a way that he doesn’t know me because of how many films of his I’ve watched. Some of them were quite influential in my life, and I got to tell him that, which was exciting.

And yeah, we, the cast all ended up exchanging Cronenberg stories because we all got to have these moments with him. Sabrina [Grdevich] even said at one point, ‘I wish we had some kind of recorder to save what he’s saying because it’s just incredible… the things tumbling out of his mouth, all the time’.”

F: I understand the show was shot with strict COVID Safety protocols in place. I would imagine being isolated with the cast and crew would have created a rather intense bond. Can you offer some insight into how the COVID situation affected the set?

JG: Honestly? I’ve been on a lot of shows. It was one of the best, if not THE best experience I’ve had in terms of the camaraderie. A lot of it has to do with top-down, the leadership pulling in good people and people who are very good at being present and listening with each other, both in cast and crew, so there was a really great, not just understanding, but a warmth.

It was our first COVID production really. All of us had been in isolation before seeing each other. And it had been over a year since any of us could be in groups without masks on indoors, so yes there was this warmth and this love and this excitement for new friendship and for collaboration.

In that sense, the dynamics between the cast were fantastic. For me personally it was just exciting to be in a cast of people that I actually could see again after we wrap. I’m used to people dispersing after a shoot. But this case I’ve stayed friends with quite a few of the cast members. It’s been a long time since that’s happened. And so I think that’s a testament to how well we all got along.

F: And with SLASHER a successful player in the anthology genre, has there been any talk of you returning to a new season, as a new character with a new story?

JG: Well, they’ve mentioned they would like to have me around again in the future, and to be honest, schedule permitting, I would absolutely do it.

I really like these people and I’m at a point where I just want to work with good people. At some point, it’s got to be with people I can care about because otherwise what’s the point of it?

F: And how has the experience changed your outlook on horror in general? Has your time on SLASHER cured your squeamishness of blood, viscera and things jumping out of shadows? Would you be interested in exploring the genre more?

JG: With every episode, there were unexpected things, the texture of the kills. I mean everything was so well written. Everyone on set was so excited when a kill happens. Whenever there’d be a kill everybody would come around and say ‘oh you should have seen what so-and-so did in their death scene’, ‘you should have seen what so-and-so looked like’, ‘people back here were gagging and crying’… it was wonderful.

However, I think it’s a case-by-case scenario. Gratuitous – that’s a flexible word, right? But you know the genre of torture-porn or whatever it’s called, those kinds of movies that I’ve heard about but haven’t watched. I don’t think there for me. I like story driven… anything.

If the story drives it, if it makes sense in this world that you’ve created then I’m all for whatever that is. Everyone has their own sensitivity. I’m sure if there were realistic sexual-assault-type scenes I would not want to be part of it. But good old-fashioned slash and dash. I think that could be my thing. Who knows?