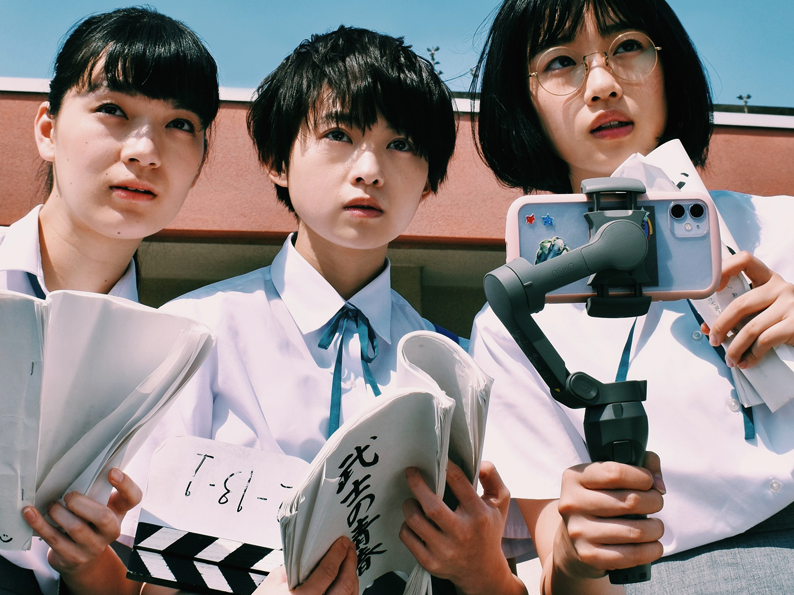 In what feels like a throwback to Japan’s golden comedy era of the early 2000’s, where films like Swing Club, Waterboys, DMC and Hula Girls enjoyed both box office and critical acclaim, It’s a Summer Film! deftly manages to update the underdog formular while embracing the quirk and chaos that defines Japan’s high school comedy genre. Set within the film-club of a Japan school, the film follows the good-natured rivalry between two student filmmakers, Karin whose rom-com comically leans into every know genre cliché available and the ambiguously named introvert Barefoot, an avid fan of chanbara, – samurai dramas – with a lofty goal of producing her own brooding bloody saga of sword wielding assassins alongside her ride-or-die crew, the equally ambiguously named Blue Hawaii, a kendo enthusiast and Kickboard, an astronomy nerd. However, when she chooses to cast Rintaro, a reluctant actor to play her lead, a series of odd events begin to unravel that not only has Barefoot questioning her understanding of the Samurai genre, but which also threatens the actual timeline in a suprising sci-fi twist.

Marking the feature debut of music video director Sōshi Matsumoto, It’s a Summer Film! resonates with a disarming charm, thanks in large part to a wonderful collective of quirky performance from its ensemble cast lead by the enchanting former idol (singer/model) Marika Itô (Kakegurui) who brings a depth of vulnerability and internalised awkwardness to Barefoot, effectively grounding the films coming-of-age subtext against the creeping sci-fi elements.

On paper, there isn’t a lot that should work with It’s a Summer Film!, but it manages to succeed despite itself. Matsumoto’s ability to navigate around the cynicism that plagues much of today’s comedy fare is commendable, while the cast, which also includes Daichi Kaneko (Ossan’s Love) as the fallible Rintaro, Yumi Kawai (A Balance) as Kickboard and Kirara Inori (Little Nights, Little Love) as Blue Hawaii each bring a vibrant energy to their respective characters. With a special nod to Coda Mahiru (Typhoon Family) as the rom-com obsessed popular-girl Karin and rapper turned actor Itabashi Shunya (Nemisis) who nails his turn as high school student with the face of a thirty year old aptly named Daddy Boy.

Peppered with the best parts of the films many genre nods, including rom-coms, teen-comedy, sci-fi and samurai-drama, It’s a Summer Film! is as charming and fresh as it is funny and entertaining, ultimately delivering a feel good cinema experience well worth your time.