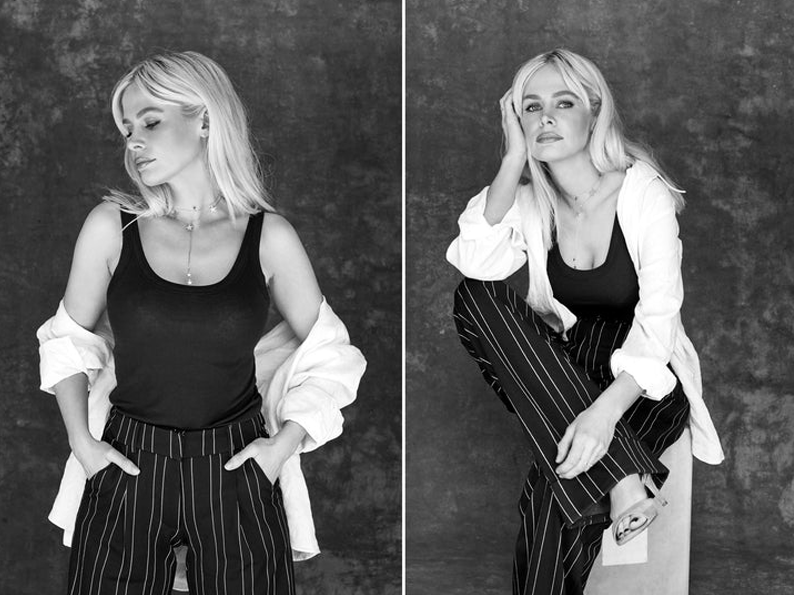 Hanna Griffiths has worn many hats as she’s navigated her way through Australia’s entertainment industry and into the ever-shifting microcosm of Hollywood. Having grown up on a farm just outside Melbourne, she honed her performance skill competing in equestrian dressage, while making her stage debut at the age of twelve with her local school theatre group. From there Hanna entered The Victorian College of the Arts, taking lessons in ballet and embracing a love of Shakespeare where she performed in A Midsummer Night Dream, Richard III and the infamous Scottish play… but it wasn’t until her father took her to a screening of Robert Redford’s The Horse Whisperer that Griffiths saw her path forward within the entertainment industry.

“One of my favourite books was The Horse Whisperer” Explains Griffiths, calling in from Melbourne where she is currently prepping a secretive new project. “Obviously because of all of the similarities with what I had doing. And then one day my father took me to see the film. And it was just one of those moments where everything that you love sort of comes together. I was watching this film; and there’s Robert Redford and Scarlet Johansson and I thought, “Oh my God, this is the coolest thing ever. Movies, I got to do this.” I didn’t know how or why or what I was going to do, I just knew I wanted to be in that world.”

As she began auditioning, Hanna secured a number of high-profile advertising campaigns including print work for the likes of Ray-Ban and Lee Denim before landing a television campaign that placed her onscreen alongside Olivia Newton John. From there Griffiths found herself cast in the hit network crime drama Underbelly, playing the angelic Jodie, which lead to her first feature film role in Geoffrey Wright’s gritty underworld adaptation of Macbeth.

“And then I got a manager from the U.S. and I started taking trips out there from 2011.” Muses Griffiths, reflecting on her transition from Australia’s film community to Hollywood, where she eventually conceded her acting ambitions to work on the production side of filmmaking. “I started going there for auditions. And I liked it a lot. And then I took some classes over at the American Dramatic Arts Centre for a year and started working in a production company behind the scenes.

With a simple Google search it’s easy to understand why the advertising sector embraced Hanna early on, with her archetype Aussie looks, sapphire eyes, girl-next-door disposition and strong professional work ethic she undoubtedly had a strong future in modelling. However, as she reveals, her transition into production in an industry hungry for aesthetic talent, marked her as something of an oddity in the Hollywood market, especially after having established herself so capable in front of the camera.

“Yeah, they do.” She laughs, “They really think I’m an oddity, even at the production company that I worked for. They were like, “Why aren’t you just auditioning? “Why do you even want to… This is hard.” And most of the editors that I work with don’t exactly look like me. They come in with their comic book t-shirts and stuff, but actually we’re all very nerdy.

“It’s not very glamorous. Everybody thinks that you would want to be in front of the camera and da da da, but I really enjoy the actual work and the creative process, that’s what it is for me. Everybody has different parts that they like but for me it’s the challenges and problem solving and overcoming holes in the story or just… I love the creative part of it.

“I’ve had a lot of experiences being around famous people and I remember thinking, “Oh God, this is awful.” I just wanted to work, and I just wanted to be on sets, and I wanted to just make the movie. So, I just kept my head down as much as I could. I love to study everything so the research, the studying, the developing, finding a book and taking it into all the stages that it goes through to get it to a script; to sell it… I love it all.”

But Hanna’s hard-earned rise in Hollywood, especially during production of her latest feature film The Sinners, hasn’t been without its own unique difficulties, thanks mostly to the cascading social upheavals taking place in L.A. and the COVIC-19 pandemic running rampant throughout California. Two unexpected real-world disasters that proved the Australian’s acumen for problem solving far exceeds mere boasting.

“I had to do all my post-production on The Sinners during COVID” she explains when the subject inevitably comes up. “Which was very challenging as another editor and I were having to work every day for about four months during lockdown, meaning we had to socially distance from each other.

“We had to close our offices during that time, so I actually hired out the sound studio where we were doing our sound editing. And normally you’d have an actor on one side of the studio and then you record the sound on the other, with glass in between. So, I put my editor in there on one side, while I was on the other side of the glass and we ended up editing the movie together like that, frame by frame. It was a huge effort.

“And then we had to bring in the actors to do the ADR and their voiceovers, which was really challenging because we couldn’t be in the same room with them. Some of actors were really chill with COVID and other showed up in full-blown space suits, and were completely freaked out. But you have to factor that in as well; like how bad is everyone’s individual anxiety?

“But yeah, just COVID, in general, was really scary. Everybody I know got it. So, I was very lucky… but I really was careful, and I was only spending time with my editor, and even then, I was really careful because he has kids and a family.”

However while COVID sent the film industry scrambling with lockdowns and policy confusion affecting productions across the filmmaking community, it sadly wasn’t the only catastrophe to hit L.A. during that time, as a wave of social justice and upheaval began to manifest into a organised movements in the wake of numerous racial killings throughout the United States.

“I’m usually pretty chill when it come to most things. It takes a lot to scare me.” Clarifies Griffiths with a little false bravado “But I was definitely worried. The worst night was actually to do with the Black Lives Matter stuff. That very first night was like a literally war zone. It was just chaos. That was the scariest night of all. I’d never seen my street on fire while people bashed in shop windows everywhere. I was living right off Melrose, which became one of the key places for people to gather during the riots. And all this was happening just as we got out of lockdown. So yeah, having those two things on top of each other, that was really scary time.”