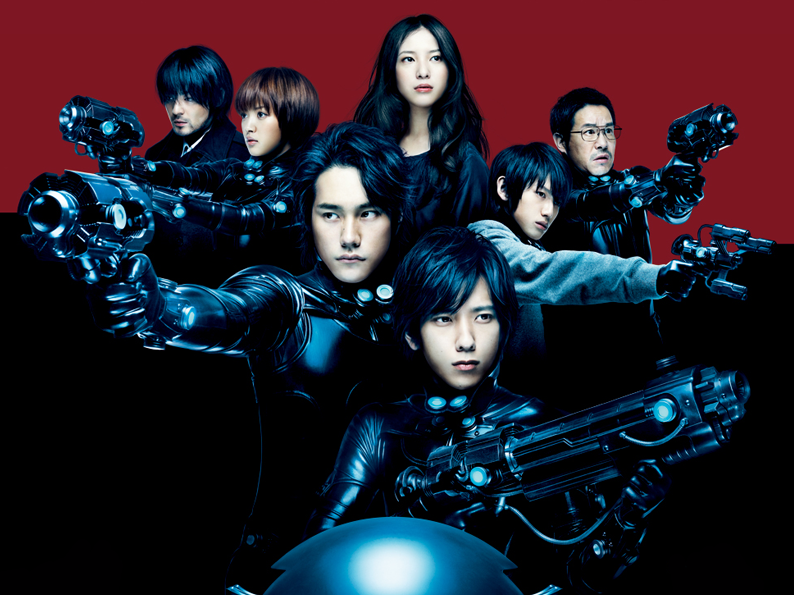 With Hollywood showing no signs of relenting on their homogenized blockbuster comic book exploits, Japanese cinema thankfully continues to draw from a far darker – and to be honest – more compelling creative pool of its native manga for cinematic adaptions.  The latest high-octane thriller to undergo the live action treatment comes in the form of a Gantz, a riveting, effects heavy reworking of Hiroya Oku’s ultra-violent print serial of the same name.

Directed by Shinsuke Sato (The Princess Blade), Gantz opens on rather tense note with former childhood friends, Kurono (Letters from Iwo Jima’s Kazunari Ninomiya) and Kato (Ken’ichi Matsuyama, Norwegian Wood) reunited on a subway track with an express train bearing down on them. Just before impact they suddenly find themselves transported to an empty apartment surrounded by a diverse group of strangers, all of whom seem to have arrived in a similar fashion facing down their own deaths, some accidental and some voluntary. The only object in the room is an ominous black orb that informs them that their old lives are gone, and they must now face whatever fate the orb, simply known as Gantz, decrees.

Presented with strange weapons, powered black latex bodysuits and an image of a deformed looking individual, the group are forcefully transported into Tokyo’s domestic suburbs where they quickly realise their task is to hunt and kill a lethal alien creature.

Armed with a sizable budget, solid production values and a talented support cast – which includes Yuriko Yoshitaka (Tokyo Rhapsody), Kanata Hongo (K-20: Legend of the Mask), newcomer Natsuna Watanabe (From Me to You) and veteran actor Tomorowo Taguchi (Tetsuo, The Iron Man) – Gantz inherently comes with the expectation of its action sequences and visual effects to ascending to a Hollywood level of execution, and thankfully the film does manage to deliver for the most part, even with an overindulgence of violence and gore seemingly applied to appease fans of the 27 volume source material.

However, Sato’s deft handling of the script, penned by Yusuke Watanabe (Twentieth Century Boys), is where Gantztruly shines through, effectively fleshing out its characters with grounded backstories and a surprising amount of emotional depth, allowing his audience to invest themselves the plight, and fates, of its reluctant ensemble of alien hunters.

Gantz is a film rife with thematics, from the complex sibling like relationship between Kurono and Kato to touching on social issues dealing with mental health and class warfare, to its earnest science fiction credentials and frenetic action. Sato has woven a rich, darkly hued blockbuster infused with insight and temperament to deliver a surprisingly potent narrative mix; especially considering the film’s final survivors are far from those you’d expect to see continue on with the upcoming sequel, Gantz: Perfect Answer.