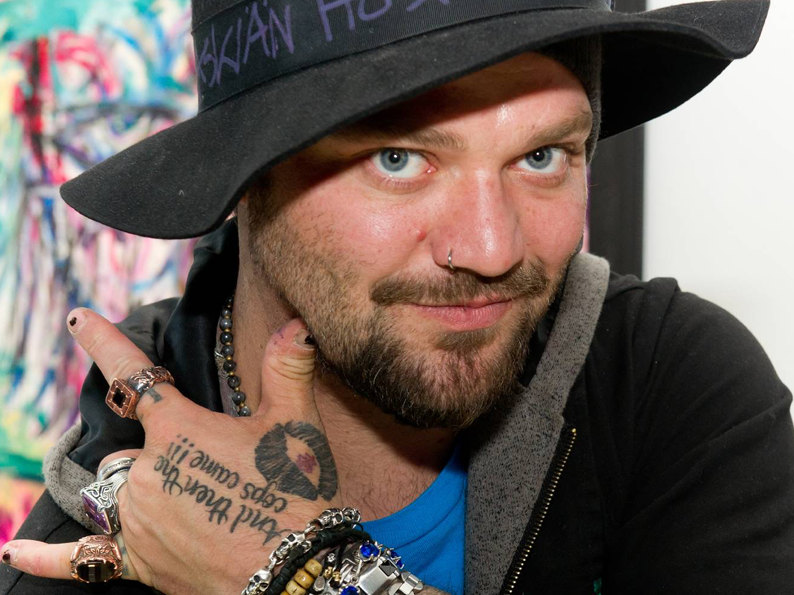 Having making headlines for their antics in the streets of Japan, India and Australia during their last cinematic outing before indulging various forms of rehab, collaborations and convalescence, the boys of Jackass reunite for another round of big screen capers under ‘supervision’ of director Jeff Tremaine with producers Spike Jonz and Johnny Knoxville for the long gestating Jackass 3D. But while the MTV publicity machine kicks into overdrive in anticipation of the films October 15 Australian premiere, cast member and pro-skateboarder Brandon, or Bam to his legions of fans, Margera recently touched down in Sydney to support his older brother’s alternative metal band CKY (an acronym for Camp Kill Yourself), unintentionally kicking off a wave of controversy in his attempt to cross the ditch.

“I got roofied at the last CKY show in New Zealand” explains an exhausted Margera as he side-eyes a frantic group of publicists and camera operators fighting for space in his Sydney hotel room. “Some chick put a pill in my drink and next thing I know I’ve fallen over. I couldn’t move or talk or anything. And I’m supposed to get on an airplane right after that happening? So yeah, the airport security in New Zealand thought I was some drunken piece of shit and wouldn’t let me on the airplane.”

In fact Margera’s recent luck with the public has been less than life affirming over the past several months after the reality star recently found himself under attack by elderly woman wielding a baseball bat outside his Pennsylvanian bar, The Note back in June. An attack the stuntman was lucky to walk away from, and which seemingly shook Margera’s usual disregard for physical injury.

“I was internally bleeding in the brain for two days. Now that sucked.” Muses Margera “This crack-head lady was always complaining about the noise whenever I had bands play at my bar, and this one day I just let her have it. I said ‘Look, if you moved to West Chester for piece and quiet then you’re a fucking idiot. This is a college town. There are always going to be frat boys screaming at the top of their lungs. Don’t be such a fucking moron.’ So she closes her curtains and I’m walking away thinking the argument is done with when I get whacked in the back of the head by a baseball bat and fall over unconscious on the road covered in blood.

“Then the police arrive asking what happened. The crack head lady goes ‘He got hit by a car’ just as I come to. So I tell them I didn’t get hit by a car, that she hit me in the head with a baseball bat. So yeah, she’s going to jail for a while.

“I was supposed to fly to L.A. that week to film the opening scenes for Jackass 3 where I was meant to get hit in the head with a boxing glove, but I still had a concussion, so they did a rewrite.”

With the discussion shifting to the imminent release of Jackass 3D, Margera’s mood becomes less somber as the conversation turns toward to ridiculous and ambiguous pranks, stunts, and camaraderie shared with his fellow Jackass crew members, including the afore mentioned Jonny Knoxville alongside returning players Steve-O, Ryan Dunn, Jason ‘Wee Man’ Acuña, Chris Pontius and Dave England. But Margera is quick to point out that while a certain finesse is used to keep the stunts feeling fresh and young, he and his castmates are anything but, with most of them now approaching, or well into their mid to late thirties.

“Well, (Johnny) Knoxville broke his neck big time” Reveals Margera with something akin to pride in his tone. “But I got a broken clavicle when I was supposed to ollie into an above ground pool 30 feet away. I was on a bungee cord at the time and it shot me so much faster than I was expecting that I missed the entire pool and ended up landing right on my face and neck.

“Then I broke three ribs on this thing called ‘electro-gravinator’ which is 40 stun guns hanging from a ceiling of this hallway, just waving around with a bunch of old tires covering the ground. So the idea is that you have to run over the tires as you’re getting shocked with 40 stun guns. Anyhow, I tripped on the last one and broke three ribs.”

Which beckons the obvious question; how do you guys actually come up with these ideas, and is there such a concept as a bad idea?

“I mean of course we want to outdo the other films, but basically when one of us comes up with an idea we write it down and put it on a stack of other ideas.  When we feel like we have enough to do a movie we get started.

Starting out on MTV back in 2000 as a half hour block of disruptive entertainment, Jackass has become the blueprint for the prank / stunt Reality TV format, elevating its crew to legendary status amongst modern punk, skater and dumb-teen culture internationally. Initially ridiculed by conservative media as a dangerous flash-in-the-pan trend, its cringe inducing carnage has subverted Hollywood expectations pulling in over $US328 million globally with its two big screen editions. A success that seemingly implores a more physical toll from its key cast, but which also plays havoc with studio planning, marketing and scheduling, as seen with the numerous delays that blew the Jackass 3D shot out to seven-month production.

“Well sometimes we will do a rewrite.” Offers Margera on the films various delays, most of which can be traced back to various cast injuries or physical trauma. “But the reason the film took seven months to shoot was that we would film for ten days straight and go home for a week to heal. Then the plan was to send us right back into it. But with my luck, I ended up getting hit in the head with a baseball bat by a fifty-year-old crack head. So I’m off getting even more hurt, while I’m actually trying to rest.

“The worst part is I feel like all Doctors are dipshits, even though maybe some of them aren’t. As an experiment I booked four meeting with four Doctors in one day. I have these things called bone spurs in my feet, and I’m going to need surgery really soon. So I asked these four doctors all the same questions and they all told me different answers. One was like ‘Oh you need to get those bone spurs cut out’ and then another was like ‘Don’t go getting those cut out, it could end up being worse later in life‘ I mean everyone’s telling me something different. I feel like Doctors just guess. And that’s pissing me of because I don’t know what to do about it.”

As for Margera’s favourite prank, the revelation is somewhat of a subdued practical joke, but arguably one of the films more grotesque and childish. And yet, very much in line with the Jackass mythos.

“There’s one bit we called ‘Wiener Cam’ which was just me with a camera taped to my dick. I mean you can’t even tell what it is; it just looks like someone’s point of view with this lopsided tan coloured thing to the left of the screen. So you’re like what the hell is that? But then, when you see piss come out, you know it’s a dick.

“Oh, and ‘Poo Cocktail Supreme’. Its Steve-O in a porter potty suspended by two canes a hundred feet up in the air attached to a bungee cord. When he drops the bungees kicks in and he’s thrown up in the air and because of the gravity all the shit and piss comes up out of the hole and just floats there for like five seconds with Steve right in the middle of it all. It’s hysterical…”

And while the Jackass film series, and its small screen counterpart may never be celebrated for their subtlety or sophistication, their popularity and success can’t be denied. With pre-sales already reaching impressive levels at the box office, Jackass fans are proving that the four-year hiatus has only whetted their appetite for more social carnage. But with admiration come the inevitable copy-catters, a unique brand of fan not content to simply enjoy the Jackass high jinx, but who wish to emulate their stunt heroes, usually making the news cycle for all the wrong reasons. A situation that Margera admits to having mixed feeling about.

“It all kind of depends on who it is. But yeah, it can get crazy.” He explains after taking a thoughtful pause. “I live in the woods in Pennsylvania and I have this big gate with nine cameras and I still get people climbing the fence saying they’re from Russia or Greece or Missouri. And because they’re a fan they’ll just knock on the door. I mean I’m not going to call the police on them because I know they’re fans, but that’s my house man. I mean if you want to meet me go into Westchester and you’ll likely to bump into me. You know what, I’m on Jackass. I’m not a movie star.

“I saw this BMX dude online go full speed toward this apartment complex which is like four stories high. He tries to go up this ramp to the top, and he just clips the top and then falls forty feet down into a bush. Now that’s something I think is gnarly, but you can tell he is an experienced BMX rider, I mean I wouldn’t even make it to the ramp you know? Take Travis Pastrana, for instance. I could never even fathom trying to back flip on a motorcycle which he does pretty much every day. It all depends on what sport you’re doing and how good you are. But as far dipshits jumping off a roof into a bush, that doesn’t really impress me… because honestly, that’s kind of easy. You just jump and hope not to get hurt.

“But what that bothers me are these kids trying to what we do. Simply because Paramount will get scared if something’s too repeatable, and they don’t want some kid in a hospital bed on TV saying he saw it on Jackass. That’s way Jackass is such a big production. For example, Steve-O in a porter potty suspended by two canes a hundred feet up in the air attached to a bungee cord… That’s something that you can’t repeat. What kid can afford two cranes and a porter potty with shit and piss in it?”

As for the future of Jackass, the common thought seems to be never-say-never, but don’t expect anything soon. However, be it the roofie induced hangover or the hype of the 3D edition priming to land, Margera seems to balk slightly at the question of whether the franchise will continue, having resigned to idea that it simply will. Instead he praises the most recent films use of 3D technology to deliver a questionably more immersive chapter of the Jackass opus, as the franchises ability to continue to remain relevant.

“Everything has started going 3D now, but so far everything that’s been released has pretty much been a CGI film, and I think Jeff [Tremaine] just figured if we did a real-life 3D movie with us, you know, fucking around with barf, piss and shit; basically, just being arseholes in 3D, that we could give the format a totally different element. I guarantee when you watch it, you’ll never look at 3D the same way again.”