Alex Proyas: The Heretic Within 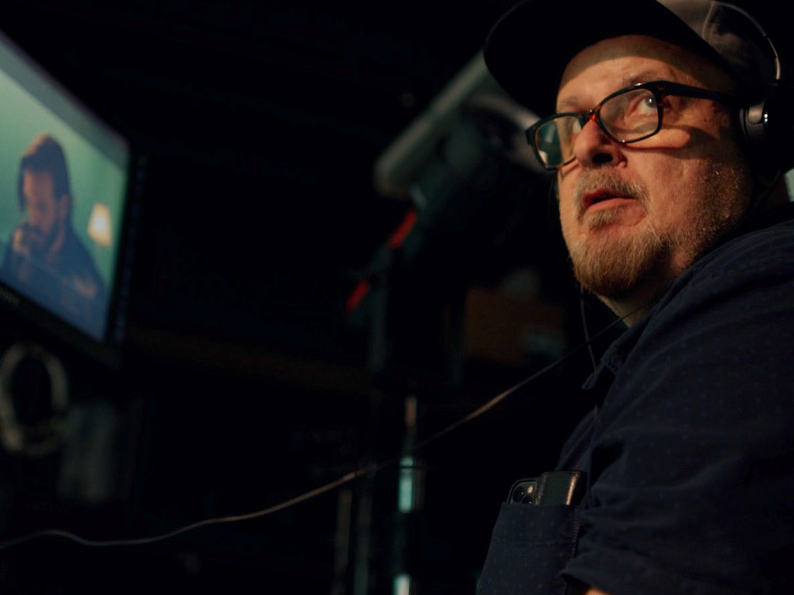 Having enjoyed a prime position as judge in last year’s Flickerfest Short Film Festival, Australian filmmaker Alex Proyas returns to Bondi’s premiere short film competition to compete with a number of other thematically charged entries for this year’s top gong in the Australian Shorts category. Produced at his new minted production facility, Heretic Foundation, Mask of the Evil Apparition once again sees the outspoken director team with Bonnie Ferguson (who headlined Proyas’ 2019 short Phobos) and his Gods of Egypt actor Goran D. Kleut in a bloody, macabre, and intrinsically absorbing supernatural mindfuck.

Proyas’ approach to filmmaking has always been to invite his audience down the rabbit hole. And for the most part, they’ve enjoyed the trip, regardless of the metaphysics, metaphor and gore that awaits. And with Mask of the Evil Apparition, Proyas is again in fine form with a visually styled short that both intrigues as a classic mystery noir, while touching on some very dark compulsions in its exploration of self.

“I just went through some old short-film scripts. It’s not that I had a lot of them; I’ve probably got a lot more feature film scripts that have never been made than short films.” Explains Proyas in a recent zoom call from his atmospherically light office at the Heretic Foundation. “But I was working on this series of short films way back. I used to do one every few years, whenever I had the resources to do it, usually on the back of some big commercial or something like that, that was paying my crew to hang on around for a few more days.

“It was a series called Book of Dreams and it was people ostensibly relating their dreams to camera and then we’d see the dream played out. It was just my excuse to basically muck around.

“So that was the first place I went and looked. Those existing scripts had pretty much just been discarded because they were too ambitious, but with what we were trying to do now, I just settled on this particular one.

“I did change it a little bit because it used to be that she relates the dream and you see it and it was supposed to be a dream. And I just excise that bit and made it all happen in the moment.”

Although Mask of Evil Apparition is set to make its Australian debut at this year’s Flickerfest Short Film Festival against the backdrop of Sydney’s gorgeous Bondi Beach, the film has made a few strategic screenings overseas including L.A.’s Screamfest Horror Short Film Festival where its received rave reviews, and more than a few stylistic comparisons to Proyas’ original Neo-noir odyssey Dark City.

“Well, it is actually related to Dark City.” He explains with a thoughtful hesitation. “But not intentionally so. As I was making it, I was thinking to myself, ‘Wow. That’s a little bit like Dark City, isn’t it?’

“In fact, Dark City, before it went through the script development process with a major Hollywood… several major Hollywood studios actually; before we got to make it, it was a far more dreamlike film. It was far more surreal, far more influenced by filmmakers that I love like Luis Bunuel or Alexandra Jodorowsky. It was surrealism, that’s what I’d really call it.

“And so Dark City shifted more into science fiction because if I wanted to have a major Hollywood studio finance, it couldn’t be surrealism. But Mask of Evil Apparition is still very strongly aligned with the initial inspirations of Dark City.

“Now of course, it’s called horror, I guess.” He elaborates. “I don’t know. Experimental? I guess that’s what it is.

“But I’m obviously aware of narrative conventions and I have had to conform to them for most of my work. But in this case, I was financing the film myself. So there was literally no brakes on my madness. I could do what I like, and if it doesn’t make coherent sense, I get go, ‘Well tough. I don’t care!’ It makes sense to me. It’s a search for identity, is what it is. Which seems most of my projects, if I start to analyze myself, most of my films are about a quest for truth and a search for individual identity. That’s in most of my projects, but it’s very much on the surface in Dark City and very much on the narrative surface of Mask of the Evil Apparition also.”

In fact, as Proyas admits to conforming in order to placate his Hollywood masters, the outspoken director certainly can’t be accused of compromising his creative integrity. With a mere handful of Hollywood films to grasp, Proyas has proven an innovative and original director, choosing to either adapt stories that influenced him as a young man, as with Isaac Asimov’s classic novella I, Robot and the DC graphic novel The Crow or to work with original screenplays such as the aforementioned Dark City, the classic Oz Rock saga Garage Days or the metaphyscial mystery Knowing. However, it’s the film’s that Proyas chose not to attach himself to that speaks to the director’s own unique brand of integrity.

“It’s just ludicrous.” Remarks Proyas with a wry smile as the subject his return to Hollywood comes up. “They do offer me these films from time to time. I got offered one of the Superman movies, and they offered me a Bond movie a while ago, which was sadly one of the worst of the recent ones. I was busy with other things, so I couldn’t really consider it. But of course, it’s Bond. I love Bond. I’m a Bond freak, and I would’ve definitely have done that. That’s a franchiser I would’ve definitely embraced for sure.

“But I don’t like the superhero stuff, the Marvel stuff and even the DC stuff. It’s boring to me. I’m just not interested in it. I don’t like it as a fan. And I’m not going to direct just because the circumstances are what are.

“My world, that I like, is original. There are so many fantastic science fiction novels that I read when I was a kid, that over the years I’ve tried to make into films. But its difficult to get them financed because they go, ‘It’s like Star Wars.’ And I go, ‘No, it’s not like Star Wars. Star Wars is like it!’ And now of course, they’re just not interested unless it has a built-in audience.” As Mask of the Evil Apparition approaches its Australian debut, Proyas presents as a filmmaker who remains steadfast to his creative process, enjoying the intimacy of working within his own production company, Heretic Foundation, and producing original content that is essentially unique in an industry fixated with brand-recognition and star-powered marketing budgets.

“It’s really my way of wrestling back control of the machinery of the means of production.” He explains regarding his innovative tech-driven production facility located in Sydney’s inner west. “The means of production has been taken from creative people and the bigger the budgets you work with, the less control of those things that you have. The more people breath down your neck, mostly executives fearful of losing their jobs, and unless your movie makes gazillion dollars. And then ironically, even when your movie does make a gazillion dollars, it never seems to go into profit.

“My own movie I, Robot, I still get insulting accounting from the studio every quarter that tells me that a movie which made, on its initial release, $450 million – in today’s money and through streaming and blue rays and blah, blah, blah, it’s probably made close to a billion dollars – I’m still being told that it was an unprofitable enterprise.

“So I go, if I, Robot was an unprofitable enterprise, then what is profitable and why does anyone make movies? And tied in with that is this issue where the studios don’t want to finance big, original fantasy and science fiction.

“They want to finance sure things, risk free franchise, sequels, remakes, blah, blah, blah, things that have got to built in audience. The marketing departments that run the studios don’t want to spend any time and money pushing something new because they believe that audiences don’t want something new.

“It was clear to me a few years ago when I reassessed where things were going, that I had to reinvent the wheel. I had to re-build. Craft a new way forward that serviced my filmmaking. Because the Indie world and the Mainstream have parted, they’re on two different wavelengths. But the Indie world still is controlled by the big guys. We need to pull that back. The creators need to pull back control because quite frankly, the level of risk that we put into those films, is not commensurate with the level reward. At least on the big movies, my unprofitable, huge, franchise tempo movies that I made a few of – that were all unprofitable, apparently – at least they paid me a nice living wage that had to last me for several years from movie to movie.

“But while I felt momentarily wealthy each time I got a green light, that doesn’t happen on independent films. With independent films, you’re supposed to now work for nothing, for no blue sky, and no reward at the end of it either. This patently is ludicrous.

“This patently does not work for anybody except for the people who are buying films at some stage down in the track like your Netflixes, et cetera. So Heretic Foundation is part of my attempt to redesign a way of making films that I think will… Well, I know it’s starting to work already, will be a revolutionary way to free the artist and win back some measure of control to the original artist, the creator of the work. So that’s my goal. That’s why I built it.”

For more information of Heretic Foundation, its facilities and work you can visit the official website at www.hereticfoundation.com